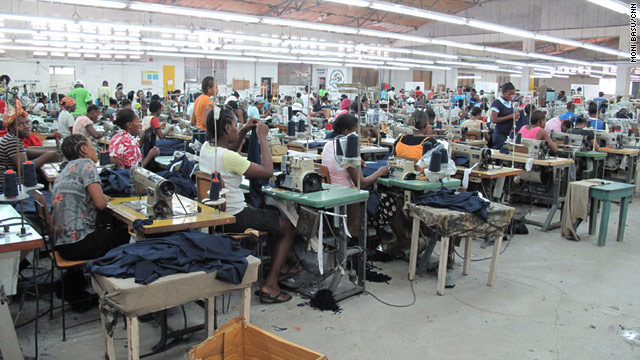 A.G. Textile was damaged in the January 12 earthquake but reopened about a month later.
STORY HIGHLIGHTS
RELATED TOPICS

Port-au-Prince, Haiti (CNN) -- Mesh Gelman's button-down khaki shirt has turned two shades darker with sweat. But he is more concerned about who will sew the perfect placket on the knit polos he hopes to deliver to Beverly Hills Polo Club.

The ones that will carry a "made in Haiti" label.

On this sweltering April day, New York entrepreneur Gelman and his business partner, Elizabeth Brown, are making the rounds at Port-au-Prince garment factories, scoping out the potential.

Gelman's mission is simple in theory. He wants Americans to help earthquake-devastated Haiti the best way they know how: by shopping.

Buy a shirt made in a Haitian factory, he says. This way, a Haitian gets a much-needed income, and a once-thriving industry in this Caribbean nation can get a jump-start on a second life.

It's the mantra of former President Clinton, the special United Nations envoy to Haiti: jobs, not charity.

Inspired by Clinton's words, Gelman, 35, began traveling to the Haitian capital to see what he could do not just to benefit his own company, Blanket America, and its parent, Extreme Linen, but to nudge other U.S. firms to invest in a ravaged economy.

"This is really about the rebranding of this country in the eyes of the American consumer," Gelman said.

A few weeks ago, Gelman and Brown, a branding and social media expert, launched a made-in-Haiti promotional campaign on Facebook. "Choose Haiti" now has about 30,000 fans.

"Think about how much aid for Haiti was raised through social media," Brown said. "So why not for this?"

Initially, Gelman and Brown intend to produce 50,000 t-shirts that say "Choose Haiti" for $9.99 each. But eventually, Gelman's company plans to produce apparel for brands like Beverly Hills Polo Club and Casual Male.

This week, Congress matched Gelman's enthusiasm for the Haitian market.

The Haiti Economic Lift Program Act also extends Haiti's preferential trade status to 2020 rather than ending it in 2018, as was mandated earlier.

That opens the gates to American garment giants to make longer-term investments in Haiti, says Georges Sassine, owner of A.G. Textiles in Port-au-Prince and head of the Haitian textile industry association.

"We received a lot of aid after the earthquake, which is good, because it helped people survive," he said, surveying his factory floor. "Now it is for people to sustain themselves, and what better way to sustain yourself than having a job?"

In January, A.G. was forced to a standstill. The factory sustained earthquake damage; most of its employees lost family members and found themselves living in makeshift camps.

About a month after the January 12 tragedy, A.G. cranked up operations again.

People like Misere Cherlie, displaced from her home after the quake, found a job at A.G. She steams the wrinkles out of navy blue New Balance shorts destined for the shelves of Wal-Mart.

She is lucky, she says, to have a steady income. There are 26,000 Haitians like Cherlie who work in the textiles industry.

But A.G. is producing at about a third of capacity.

In 1992, Haiti's textile industry employed as many as 132,000 people. Years of political instability and trade embargoes slashed that number to 12,000, Sassine says.

With the help of the duty-free status afforded to Haiti by the United States, the industry started to make a slow comeback. Then, the earthquake dealt another severe blow.

Sassine hopes the new bill will help employ as many as 80,000 Haitians in this sector. He hopes that textiles, which account for almost 70 percent of Haiti's exports, will help ordinary people move up from day-to-day survival.

Sassine points to an entire section of sewing machines that has collected dust for a long time. A good cleaning and oiling should bring them back to life. One day soon, he expects, they will add to the steady hum of stitching.

Sassine greets Gelman and Brown at A.G. He says Gelman's drive is exactly what the Haitian market needs.

"If he's too successful, we'll be in trouble," Sassine joked of Gelman's venture.

He hopes new companies will enter Haiti and build the kind of infrastructure needed to sustain the industry. And new jobs in turn will fuel the building of schools, shops, entire communities.

He concedes that these are not high-quality jobs. The workers make about 200 gourdes (about $5) a day. But it's better than no job.

"What they all want," Sassine said, pointing to the workers on the assembly lines, "is education for their children."

Gelman visits another nearby factory that is making cotton shirts and blankets for his firm. It has another big client: Old Navy.

Nine employees on each line are churning out dozens of colorful cotton t-shirts for the clothing giant. The label on each collar says "made in Haiti," but Gelman wants more than that.

His products will carry a special tag announcing where they were made. He thinks U.S. customers will steer toward a Haitian product if they know that it was made here.

It's all about taking advantage of the sentiment that surged after the earthquake.

"Haitian factories don't promote themselves," Gelman said. "They have no clue how to do it. They have been off the map for so long."

He has Asian companies knocking on his door all the time for contracts.

"If you don't show up to the party, no one is going to use you," he said. "It's kind of a shame, because it's a great opportunity, especially with Haiti here being a neighbor."

Haiti is more cost-effective, and it takes less time for orders to reach their clients.

Gelman says a container carrying 600 comforters made in China costs $2,400 to ship from Shanghai to the United States. That same container will cost $800 from Port-au-Prince.

On his way to the next garment factory, Gelman's Blackberry rings.

"This is great news," he said.

He has just learned that new bill in Congress has been extended from apparel to include home fashions: bedsheets, comforters, pillow shams.

Extreme Linen, which Gelman established in 2003, serves as JCPenney's largest supplier of home fashions. Gelman hopes that Penney's stores will be flooded with Haitian products.

"This is exciting," he said.

It's a good ending for this trip to Haiti. He does not pretend to be solely a do-gooder. "Unquestionably," he said," it's about making money. We're not a nonprofit."

But when he goes home after a day's work, Gelman says, he feels good about his business decisions. He hopes that other American companies will look south to Haiti the same way.

Greed, he says, half joking, can be a very good thing.