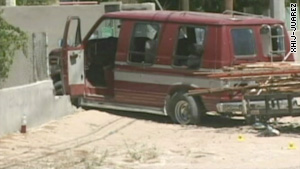 Authorities are waiting to interview survivors of Friday's shooting, during which a van crashed into a kindergarten.
STORY HIGHLIGHTS
RELATED TOPICS

The victims were found in the Colony of Los Nogales neighborhood in Ciudad Juarez, Chihuahua. Their hands and feet had been bound with duct tape, state attorney general's office spokesman Arturo Sandoval said.

Investigators were still working on identifying the victims, Sandoval said.

Attached to the bodies were two notes from a drug cartel, Sandoval said. He would not elaborate on what was written on the notes.

"This phenomenon [of violence] here ... we've been seeing it, and living it in Juarez for the last two years," Sandoval said.

The killings were the latest in a nearly four-year-old eruption of drug-related violence in Juarez and surrounding Chihuahua state.

At least 883 people have been killed in drug-fueled violence in Juarez this year, officials say.

According to a report released in April by the Mexican government, Chihuahua is the country's hardest-hit state by drug violence, with more than 6,757 people killed since the start of the drug war at the end of 2006.

But despite local reports and contrary to popular belief, the violence in Juarez has lessened recently, said Sandoval.

"Before we had 10 homicides a day, now we have six. This has been constant for the last two years. It comes and goes," he added.

The body of another man was found Sunday morning dumped in front of a church in the Valley of Juarez two miles outside Juarez proper, Sandoval said.

Drug cartels often dump bodies in front of churches in Juarez as a tactic to intimidate priests from repeating details of drug violence heard during confessionals.

On Friday in the Valley of Juarez, six men were killed after they were shot by assailants and their van crashed into a kindergarten, municipal police department spokesman Jacinto Seguro said.

Two others involved in the crash, identified by police as Enrique Torres, 33, and Francisco Manuel Torres, 26, were injured and were still recuperating in a hospital, according to state prosecutors.

"We have not had a chance to interview them yet, but we will. We're waiting for them to recuperate before we start the interrogation process," Sandoval said. "But we have already started the investigation," he added.