Dozens dead, more than 500 in custody after violence in Jamaica 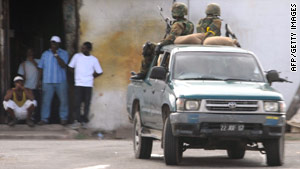 Kingston, Jamaica (CNN) -- Police in Jamaica have more than 500 people in custody, the government said Wednesday, after a failed attempt to arrest a suspected drug kingpin resulted in violence that left dozens of people dead.

Some semblance of calm appeared to have taken hold in Kingston, though, after four days of gun battles between security forces and supporters of the alleged drug lord.

No murders were recorded in the capital overnight, and although there were "a number of shooting incidents," security forces were able to "repel" them, the government said Wednesday.

Security forces are "processing" people who have been detained, with students and young people getting first priority, the government said.

"The Security Forces are also helping residents of Tivoli Gardens" -- the neighborhood where much of the violence took place -- "taking those needing medical care to hospitals. Medication is also being provided to residents," the government said.

Separately, Jamaica's prime minister Wednesday rejected allegations that he was "a known criminal affiliate" of the suspected drug lord at the center of the incident, calling the claims "libellous," "scurrilous" and "malicious."

Prime Minister Bruce Golding "categorically denied, and dismissed as extremely offensive, reports on the US-ABC network which describe him as 'a known criminal affiliate of hunted drug lord,' Christopher 'Dudus' Coke," the government said in a statement.

"Mr. Golding says he is also outraged by an article in The Independent, a UK newspaper, that the 'drug gang was on [the] payroll of Jamaican prime minister.' He said both publications, by seeking to link him personally with the alleged drug kingpin, were clearly part of a conspiracy to undermine the duly elected government of Jamaica," the statement continued.

"The reports have made damaging and libellous assertions and he repudiated the scurrilous and malicious reporting, which he said must be dismissed with the contempt that it deserves," it said.

The street battles have taken place in the Kingston neighborhoods of Tivoli Gardens and Denham Town, officials said. The violence has affected ordinary people living in the area, which now has a "post-9/11" air, one local told CNN by phone.

"The daytime really isn't a problem, but the night can be. Your rights are reduced after 6 p.m. The police can stop you for virtually any reason. It's a similar situation to after "the September 11, 2001, terror attacks in the United States," a Kingston florist said Wednesday.

Another woman said that the front of her house had been "shot up" and that police had taken away her nephew and grandson for questioning. They did not say how long her relatives would be detained.

Violet Dias, an American citizen from New York, said a day earlier that she was locked down in her house because of the assault.

"We can't even look out," she told CNN by phone Tuesday. "We have no food. We can't get anything to eat."

Dias, an amputee and an asthmatic, is due to return to the United States on June 14.

The government said those killed were mostly males, and their bodies were recovered from areas close to barricades, building entrances and gullies coursing through Tivoli Gardens.

Prime Minister Golding has declared a state of emergency in some parts of Kingston. Schools are closed in the capital, and at one point, some flights were canceled, U.S. State Department spokesman P.J. Crowley said.

Coke maintains a heroic reputation in the Kingston slums, with some people comparing him to Robin Hood, Jesus and one-time Colombian kingpin Pablo Escobar.

That's because he has helped the community by handing out food, sending children to school and building medical centers.

He was charged in August 2009 by the U.S. attorney's office in New York, which accused him of leading an international criminal syndicate known as the "Shower Posse."