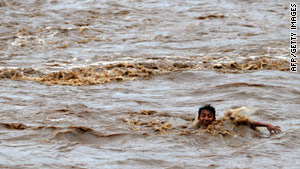 San Salvador, El Salvador (CNN) -- The remnants of Tropical Storm Agatha were headed into the Caribbean Sea late Sunday after leaving behind more than 80 dead in Guatemala and El Salvador, authorities in those countries reported.

Most of the dead were in Guatemala, where heavy rains triggered mudslides that collapsed homes and forced thousands to evacuate. The country's preliminary death toll was 73 on Sunday, with 49 of those reported in the province of Chimaltenango, said David de Leon, Spokesperson for the National Commission for the Reduction of National Disasters. That toll was expected to rise, he said.

And El Salvador reported nine deaths from the storm. The government issued a red alert, the highest warning level, which shut down schools and opened up shelters for families in the affected areas, President Mauricio Funes said.

Agatha, an Eastern Pacific storm, struck land Saturday and was downgraded from a tropical depression to a remnant storm on Sunday. It was last reported moving toward the western Caribbean on Sunday afternoon, but was expected to keep producing heavy rains through Monday, according to the U.S. National Hurricane Center.

In Guatemala, the storm damaged more than 3,500 homes and forced the evacuation of more than 61,000 people, the nation's emergency office said Sunday. And in Mexico, the government's National Meteorological Service predicted torrential rain for Chiapas state, intense downpours in Tabasco and strong showers in Quintana Roo.

Swollen rivers and mudslides were a concern. In Guatemala, four children were buried in a landslide outside Guatemala City, the nation's capital. Four adults were killed in the capital, disaster officials said. Another two children and two adults were killed when a boulder, dislodged by heavy rains, crushed a house in the department of Quetzaltenango, 125 miles (200 km) west of Guatemala City, officials said.

Guatemala is already under a 15-day state of calamity because of Thursday's eruption of the Pacaya volcano, which killed at least three people. At least 1,800 people had already been evacuated to shelters. The volcano also shut down the capital's international airport.

Ash from the volcano that covered city streets and other areas mixed with the heavy rain, forming a goo that caused many drainage systems to clog.

Guatemalan President Alvaro Colom said damage from Agatha was probably worse than the destruction caused by Hurricanes Mitch in 1998 and Stan in 2005, both of which devastated the Central American country.

"The country is suffering a great tragedy, this attack by nature," Colom said from the Guatemalan emergency agency center.

Emergencies were reported in all of Guatemala's 22 states, called departments. The worst, Colom said, was the Pacific Ocean port of Champerico, which is isolated.

"We have no way of getting there to help the public, which is in danger because of flooding," Colom said.

The president said he has asked the international community for help.