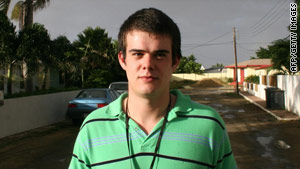 Joran van der Sloot, once tied to the Natalee Holloway case, is a suspect in a murder in Peru, officials say.

(CNN) -- Joran van der Sloot, the Dutch man once considered a suspect in the 2005 disappearance of Alabama teenager Natalee Holloway, is the suspect in the killing of a woman in Peru, Peruvian police officials said Wednesday.

Chilean police are looking for van der Sloot in various hotels and other overnight accommodations in the border region with Peru, he said. Van der Sloot will be extradited to Peru if captured, he said.

Police also are checking border and customs checkpoints. As of Wednesday there were no sightings of the suspect, and police were investigating if van der Sloot went deeper into Chile, Buines said.

There is "incriminating evidence" linking van der Sloot to the killing of 21-year-old Stephany Flores Ramirez, who was found with multiple stab wounds in a Lima hotel room Wednesday, Cesar Guardia Vasquez, of the criminal investigations unit, said at a news conference.

The hotel room where Flores was found was registered in van der Sloot's name, he said.

A hotel guest and an employee witnessed the pair entering the hotel room together at 5 a.m. on Sunday, Guardia said.

Police have video of the previous night, May 29, of van der Sloot and Flores together at the Atlantic City Casino in Lima, he said.

According to immigration officials, van der Sloot fled to Chile over land on Monday, Guardia said.

"We have all the evidence to show that the killer is this man," the victim's father, businessman and race-car driver Ricardo Flores told CNN en Español.

But van der Sloot's attorney, Joseph Tacopina, told CNN it was too early to make any conclusions.

Ricardo Flores said that police found his daughter's car about 50 blocks from the hotel, and that inside, they found pills like those used in date rape cases.

Similar to the Holloway case, van der Sloot and Flores allegedly met at a night spot, in this case, a casino. Ricardo Flores said he did not believe that his daughter knew the Dutch citizen from before.

Both of them speak English, and at the casino they struck up conversation, he said.

Interpol has alerted its office in Chile and other bordering countries of the case and placed them on alert in case van der Sloot tries to leave that country, Peruvian Interpol Interim Director Gerson Ortiz told CNN.

An international arrest warrant could be issued in the next 48 hours, he said.

In 2005, van der Sloot was arrested in Aruba along with two other men, brothers Deepak and Satish Kalpoe, in connection with the disappearance of Natalee Holloway.

Van der Sloot, who was attending college in the Netherlands, was brought back to Aruba. But judges ruled the new evidence -- which included an Internet chat the same day Holloway disappeared with one of the three youths saying she was dead -- was not enough to keep them jailed.

CNN's Eric Marrapodi and Mayra Cuevas contributed to this report.