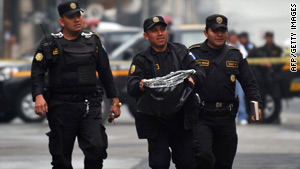 One of the severed heads was found in a plastic bag in front of the Congress building in Guatemala City.

The notes were addressed to Interior Minister Carlos Menocal and Eddy Morales, the nation's director of prisons. One of the notes said the officials must impose order in the nation's prisons or these atrocities would continue, police said. The other said that impunity against lawlessness must end, according to police.

The heads were inside plastic bags, one of them in front of the main doors to the national Congress in Guatemala City, police said.

"That's obviously a first for Guatemala," said Samuel Logan, an expert on Latin American gangs and founding editor of the Southern Pulse intelligence report. "That's something we've seen the Zetas (drug cartel) do in Mexico."

Donald Gonzalez, a spokesman for the national police, attributed the slayings to the Zetas or another narcotrafficking group, the Prensa Libre newspaper reported. Gonzalez did not immediately return a phone call seeking comment.

Logan did not discount the possibility that anti-crime vigilantes could have been responsible.

"It could also be death squads," he said. "Off-duty police officers or other types hired by local businessmen who say, 'Go after the street gangs.'

"There's a lot of moving parts to this story," said Logan, who recently wrote a book on the Mara Salvatrucha gang of Central America and is working on a book about the Zetas, which has emerged as Mexico's most ruthless drug cartel.

Logan said in an interview last year that there are two main criminal elements in Guatemala: drug cartels that deal in large-scale exportation and street gangs that sell drugs at the retail level and are involved in other crimes, such as robbery and extortion. In some cases, they work together.

When those criminals get arrested, they continue their activities inside prison, said Fernando Carrera Castro, director of the Central American Institute for Fiscal Studies in Guatemala City.

"The prisons, in general, are centers of corruption," Carrera said last year. "From inside prison, they direct kidnappings, extortion, drug trafficking."

In September, three coordinated attacks killed four prison officials in a five-hour span. Left dead were a prison assistant director, a warden and two guards. One guard and a shooting suspect were wounded, as were three citizens. One of the wounded was a woman in the eighth month of pregnancy, news accounts said.

At least three prison guards have been killed and five wounded in five attacks this year, published reports say.

Logan said that all of Central America is under attack from organized crime cartels, because the region is pinched between Colombia and Mexico, the two biggest sources of drugs in the area. U.S. interdiction efforts that have targeted the flow of drugs through the Caribbean Sea also have forced cartels to travel through the Central American isthmus, Logan said.

Said Heather Berkman, a Central America analyst with the Eurasia Group consulting firm, "The narcos are coming down from Mexico."

Berkman made the same point in an interview last year.

Berkman also pointed out that the Guatemalan government reduced anti-crime spending in the 2010 budget because of the nation's dire economic situation.