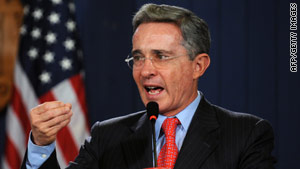 Uribe interrupted a televised press conference in the town of Quibido to answer a call from Gen. Oscar Gonzalez to immediately announce that the two hostages were in the hands of Colombia's military.

"May I allow myself to communicate to the Colombian people, from Quibdo, some great news: our joint military forces just rescued General Mendieta and Colonel Murillo," the president said.

"They are in combat right now in the jungles of Guaviare in order to rescue them unharmed," he said.

"Both are in the hands of our armed forces," he said.

A police spokesman said the military operation took place in eastern Colombia in Guaviare province, and that the two rescued hostages are safe. The spokesman could not say when they will be flown out of the zone.

Mendieta and Murillo were both taken prisoner by the FARC in jungle town of Mitu.

Mendieta was a national police colonel when captured by the FARC and was promoted by the agency during his time in captivity.

He was the highest-ranking officer held by the rebels.

According to Colombia's El Espectador Newspaper, Mendieta celebrated his 53rd birthday on Sunday.