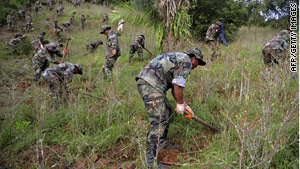 (CNN) -- If current trends continue, Peru is poised to overtake Colombia as the world's top producer of coca, the plant used in the production of cocaine, according to a United Nations report released Tuesday.

The U.N. Office on Drugs and Crime's coca crop surveys for Bolivia, Colombia and Peru showed a 5 percent drop in the amount of coca being grown in the Andean countries, but Peru bucked the trend with a significant increase.

In Colombia, long the leader in cocaine production, cultivation of coca fell by 16 percent to 68,000 hectares, compared to the year before, the U.N. agency said. In the past 10 years, the decline is even greater, a 60 percent decrease, the report said.

In total, the report estimated that 410 metric tons of cocaine were produced in Colombia in 2009, a 9 percent decrease from 2008.

"The drug control policy adopted by the Colombian government over the past few years -- combining security and development -- is paying off," UNODC Executive Director Antonio Maria Costa said in a statement.

Part of the reason for the decrease in cultivation in Colombia is that growing the coca bush has become less profitable. According to UNODC, coca farmers in Colombia earn barely more than $1 a day.

"If the current trend continues, Peru will soon overtake Colombia as the world's biggest coca producer -- a notorious status that it has not had since the mid-1990s," Costa said.