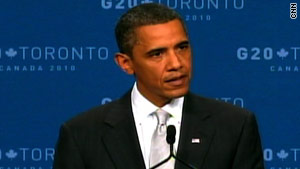 Toronto, Ontario (CNN) -- The Group of 20 leaders meeting in Canada this weekend "have forged a coordinated response to the worst global economic crisis in our time," U.S. President Barack Obama said Sunday at the conclusion of the summit.

The leaders gathered at the conference agreed to ambitious targets for getting economic deficits under control, pledging to cut them in half by 2013, according to a final declaration issued by meeting participants.

Obama said the agreements show that nations can "bridge our differences" and "coordinate our approaches."

He noted progress made in three areas: ensuring that the global economic recovery is strong and durable, continuing to reform the global financial system and addressing a range of issues that affect countries' prosperity and security.

"Every economy is unique, and every country will chart its own unique course, but make no mistake -- we're moving in the same direction," Obama said.

He gave specific examples of the United States' efforts to rebound from the global recession -- setting a goal of doubling U.S. exports over the next five years, strengthening U.S. economic cooperation with Russia and pushing to complete the Korea-U.S. Free Trade Agreement, a move he said "will create new jobs and opportunity for people in both our countries, and enhance America's competitiveness in the 21st century."

Obama stressed the importance of promoting economic growth as a means to set up future fiscal soundness.

"We must recognize that our fiscal health tomorrow will rest in no small measure on our ability to create jobs and growth today," he said, adding that "in short, we have to do everything in our power to avoid a repeat of the recent financial crisis."