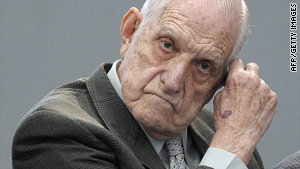 Buenos Aires, Argentina (CNN) -- A former Argentinian dictator and an ex-army chief are scheduled to go on trial this week on charges of human rights abuses during the nation's right-wing rule from 1976-83, the government's Judicial Information Center said.

Jorge Rafael Videla was among the coup leaders who overthrew then-President Isabela Martinez de Peron in March 1976. He ruled as dictator until 1981.

Also scheduled to go on trial this week in a separate proceeding will be Luciano Benjamin Menendez, former head of the Third Army Corps. He is accused of violating the human rights of four people.

There are 31 defendants in the two trials, the Judicial Information Center said on its website Tuesday.

Bignone, 82, faces two other trials: in the abduction and disappearance of doctors and nurses at the Hospital Posada and of two soldiers when he was head of the Military College.

Up to 30,000 students, labor leaders, intellectuals and leftists who ran afoul of the dictatorship because of their political views disappeared or were held in secret jails and torture centers during the nation's eight-year "Dirty War."

In the trials that start this week, the proceedings for Menendez are slated to begin Thursday in the city of Mendoza. Six other defendants will go on trial with him.

The trial against former dictator Videla is scheduled to start Friday in Cordoba. He will be joined by 24 other defendants, the Judicial Information Center said.