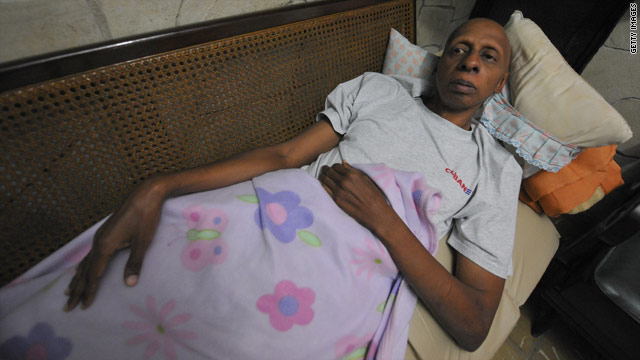 Guillermo Farinas has been on a hunger strike since February 23 in an effort to free 25 political prisoners.
STORY HIGHLIGHTS
RELATED TOPICS

Havana, Cuba (CNN) -- The number of political prisoners held in Cuba has dropped by 34 inmates since January, the island's unofficial commission on human rights and national reconciliation reported Monday.

Commission head Elizardo Sanchez told CNN that the government appears to have modified its approach from long-term detentions to brief arrests in an effort to intimidate political opposition.

Sanchez reported 802 short-term arrests since January. The recent decline reflects a drop in political prisoners by almost half since President Raul Castro assumed power in 2006.

The commission had then identified 316 jailed dissidents. On Monday, it reported that number had been reduced to historic lows at 167.

Caballero said Farinas is "conscious (and) oriented," but his frail condition has doctors "on edge," especially because of a potentially lethal blood clot that has developed in his neck.

"I am conscious of my nearing death and I consider it an honor because I am trying to save the lives of 25 political prisoners," he said in a written statement posted on a dissident website. "The only ones responsible for my future death are the brothers Fidel and Raul Castro."

Cuba has come under increasing pressure over its human rights record since Zapata's death, which drew condemnation from Europe and the United States.

He is expected to pressure Cuba on human rights and petition for the release of political prisoners.

The Cuban government was not immediately available for comment, but has often labeled jailed dissidents as "mercenaries" in the pay of foreign governments.

Still, the commission's report follows a series of prisoner transfers and the recent release of two political dissidents, raising questions about whether Cuba is slowly changing policy toward its jailed political activists.