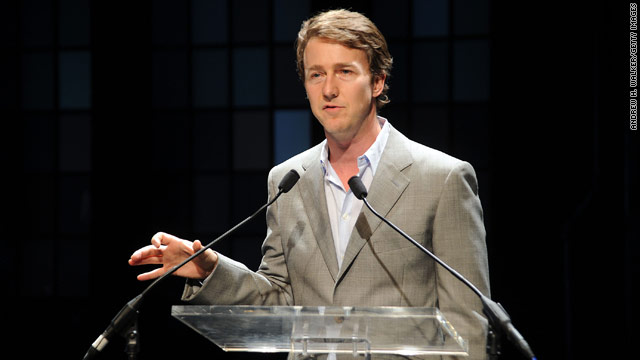 United Nations (CNN) -- Edward Norton -- Oscar-nominated actor of "American History X" and "Primal Fear" fame -- is the latest Hollywood star to lend his celebrity status in support of a United Nations cause.

"Edward Norton has brought global star power to global issues -- community development and conservation, causes that are clearly close to his heart," Ban said in a statement after appointing Norton.

"It is an issue that I've been engaged with on many different levels for a number of years," Norton said at U.N. Headquarters in New York. "But it's very, very exciting to be asked to engage with it on the level of the U.N. with its incredible capacity and reach."

As opposed to focusing on dated methods of conservation such as setting aside preserved areas of land, Norton said in his new role he would work on addressing human needs, which he said he believes is "the key to long-term preservation."

"People have recognized that fragmenting the ecosystems or creating protected pockets is not actually authentic to the way ecosystems work," he said.

Norton has been an advocate for many causes, recently helping to launch a social networking platform, Crowdrise, aiming to boost global participation in charitable work. He is also a board member of the Maasai Wilderness Conservation Trust, and ran the New York City Marathon last year, helping to raise over $1 million for the trust and local communities in Kenya supported by the group.

As biodiversity goodwill ambassador, he will be "increasing people's focus on the fact that human well-being is intertwined fundamentally with biodiversity," Norton said.

"I think catastrophic events like what's happening in the Gulf with the oil spill do highlight for people that there is enormous ramification for human well-being through a loss of biodiversity," Norton said.

Norton is also using his creative talents as a filmmaker to raise conservation awareness. He said his company, Class 5 Films, has worked television projects and on a potential feature film with environmental themes.

According to the U.N., biodiversity is "essential in sustaining the living networks and systems that provide the world population with health, wealth and food and fuel."

This year marks the international year of biodiversity for the United Nations. By the end of the year, the U.N. hopes to see a significant reduction in rates of biodiversity loss through practices such as deforestation, excess cultivation and over-fishing that damage the environment and contribute to overall global poverty.