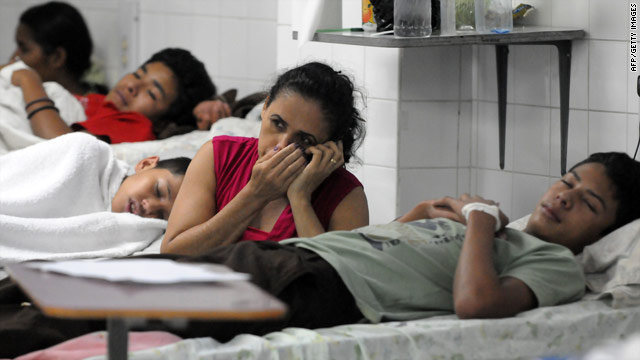 Dengue patients are treated at a hospital in Tegucigalpa, Honduras. The virus has caused a national emergency.
STORY HIGHLIGHTS
RELATED TOPICS

(CNN) -- The American Embassy in Honduras has issued a warning about classic dengue and hemorrhagic dengue fever, which have killed 21 people in the country this year. Five more deaths are under investigation.

There have been 17,620 cases of classic dengue and 594 of the hemorrhagic type, the embassy said in a warning last week to U.S. citizens living in Honduras or planning travel to the country.

Honduras declared a national emergency last month due to the mosquito-borne virus.

Certain countries in Central and South America as well as the Caribbean are reporting dengue activity, the Centers for Disease Control and Prevention said in a June outbreak notice. In addition to Honduras, dengue has been reported in Argentina, Brazil, Colombia, Costa Rica, the Dominican Republic, El Salvador, French Guiana, Guadeloupe, Peru and Puerto Rico.

Mexico also has reported a dengue outbreak, with 16 cases over a 15-day period in Guadalajara, the nation's second-largest city. There were eight cases of hemorrhagic dengue and eight cases of the classic variety, the notisistema.com news website reported last week, citing the National Center for Preventive Programs and Disease Control.

Dengue infections are a worldwide occurrence and are commonly reported from most tropical countries in the South Pacific, Asia, the Caribbean, the Americas and Africa, the CDC said.

Although dengue transmission often occurs in rural and urban areas, infections are reported most often in urban settings. In Honduras, the government reported that 85 percent of the hemorrhagic dengue cases occurred in the capital of Tegucigalpa.

The Honduran government has begun a large fumigation effort in addition to public education.

The dengue fever virus cannot be spread directly from person to person and must be transmitted through the bite of an infected mosquito.

There is no vaccine to protect against infection and no treatment for the disease.

According to the World Health Organization, more than two-thirds of the reported cases in the Americas from 2001 to 2007 occurred in Argentina, Brazil, Chile, Paraguay and Uruguay. From among those nations, Brazil reported more than 98 percent of the cases, the WHO said.

Nearly 20 percent of the cases in the Americas for the same time period occurred in Bolivia, Colombia, Ecuador, Peru and Venezuela, the world health agency said. Colombia and Venezuela had most cases in that region.

Central America and Mexico accounted for about 12 percent of the cases in the Americas, the WHO said. Costa Rica, Honduras and Mexico reported the highest number of cases for the region.

Caribbean countries had nearly 4 percent of the cases for the time period, while most of the nearly 800 infections reported in the United States were among travelers who had returned from infected areas, the health agency said. There were sporadic cases in Texas along the border with Mexico, the WHO said.