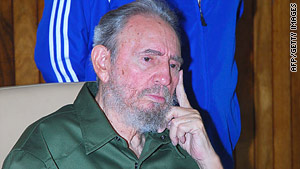 Havana, Cuba (CNN) -- Fidel Castro appeared publicly in his trademark olive green shirt on Saturday for the first time since he fell ill and renounced power four years ago, according to a state-run website.

Castro made his appearance in Artemisa, a town about an hour outside of Havana, also making this his first reported trip outside the capital in four years, according to the website Cubadebate.

A picture of the 83-year-old Castro also appeared on the site. Olive green rebel fatigues were his signature uniform during his nearly 50 years of rule.

State TV later showed him giving a speech to honor rebels killed 57 years ago during the July 26 attack on an army barracks that ended in failure but launched his revolution. He also put flowers on the rebels' tombs, video showed.

Castro handed power to his brother, Raul, in 2006 after undergoing intestinal surgery and disappeared from public view. State media have published occasional videos and photos of the historic leader wearing track suits.

Earlier this month, he re-emerged in public for the first time and has made five appearances in closely controlled events, usually donning casual checked shirts.

Speculation has grown over the possibility of his attending a mass rally in central Cuba on Monday to commemorate the July 26 events.