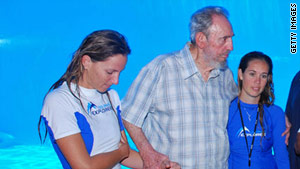 Havana, Cuba (CNN) -- Cuba's Fidel Castro on Tuesday said he would publish a new book in August on the fighting more than 50 years ago between his ragtag rebels and the 10,000-strong army under former dictator Fulgencio Batista.

In an essay published Tuesday on the state-run website, www.cubadebate.cu, Castro said the book will be called "The Strategic Victory."

"I didn't know whether to call it 'Batista's Last Offensive' or 'How 300 Defeated 10,000,' which would sound like a science fiction story," he said.

Castro said the 25 chapters contain photos, maps and illustrations of the weapons used during a series of battles that lasted 74 days in 1958 and paved the way for his bearded revolutionaries to declare victory on January 1, 1959.

Castro went on to rule Cuba for 47 years until he was sidelined by illness in 2006. He has spent most of the last four years in seclusion, writing frequent essays called "Reflections of Comrade Fidel" for state-run media.

In recent weeks, he has re-emerged on the public stage, making seven public appearances.

On Monday, Cuba celebrated the 57th anniversary of the launching of Castro's Revolution. He failed to appear at that event in central Cuba despite high expectations, but he paid tribute at a small ceremony in Havana to the rebels who were killed.

Castro also held lengthy talks with a group of artists. Both events were later broadcast on state TV.

Castro said he would now start work on a book covering the second half of the fighting, called "The Final Strategic Counteroffensive."