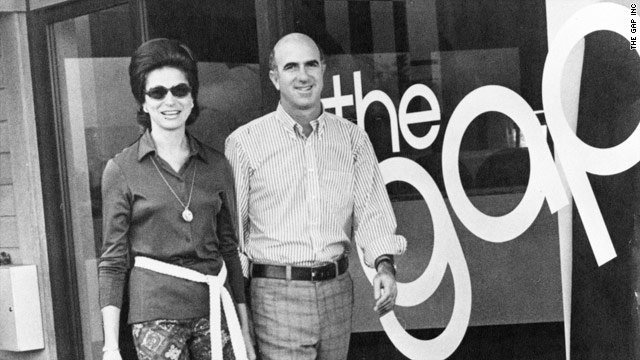 Donald and Doris Fisher outside a GAP store. They started collecting art in 1973, a few years after they founded GAP.
STORY HIGHLIGHTS

London, England (CNN) -- Better known for affordable denim than modern art, Gap founders Don and Doris Fisher amassed a collection of over 1,000 works by artists like Andy Warhol over 35 years.

Now, many of the works from the Fisher Collection are on public display at the San Francisco Museum of Modern Art (SFMOMA).

Calder to Warhol: Introducing the Fisher Collection includes 160 works from the couple's 1,100-strong collection, donated to the museum shortly before Donald Fisher's death in 2009.

One of the most impressive modern collections in the world, it comprises major works of painting and sculpture ranging from 1928 to the present day, including works by artists like Gerhard Richter, Alexander Calder and Roy Lichtenstein.

"In terms of the art of the last fifty years, it certainly makes this one of the key collections of this contemporary period," Elise S. Haas Senior Curator of Painting and Sculpture, Gary Garrels told CNN.

The collection has greatly enhanced the museum's holdings of contemporary art, placing it alongside world-class institutions such as London's Tate Modern and New York's Museum of Modern Art.

Previously housed in the Gap headquarters in San Francisco, the collection has a home in the museum for the next 100 years.

The exhibition is the centerpiece of the museum's 75th anniversary celebrations. A $480 million expansion plan to triple the gallery and public spaces in the next five years was announced earlier this year.

Works from the collection, many of which have never been shown publicly before, are currently spread across the 30,000 square feet of museum space, including sculpture on the rooftop garden.

At least half of the collection will be on display once the museum has completed its expansion.

Garrels selected the works for the exhibition, which include 16 of the couple's collection of 21 Andy Warhols and 10 of their 45 Alexander Calders.

"I know the collection very, very well," Garrels told CNN. "I worked here before, from 1993 to 2000, and I came back about a year and a half ago, so I have a long history with the collection."

In terms of the art of the last fifty years, it certainly makes this one of the key collections of this contemporary period
--SFMOMA Curator Gary Garrels
RELATED TOPICS

The exhibition shows the breadth of the Fishers' holdings, giving whole rooms to artists whose work they collected enthusiastically, such as paintings by German visual artist Gerhard Richter and sculptures by American minimalist sculptor and video artist Richard Serra.

It also gives space to the collection's hidden gems.

These include a painting by American artist Lee Krasner, who was married to fellow abstract expressionist Jackson Pollock. "They have this spectacular painting from 1961 and I've given that a very prominent place in the show, even though it's only one work," Garrels said.

Donald and Doris Fisher began collecting art in 1973 on the advice of a friend, a few years after they founded the Gap retail company.

They began buying prints and soon moved on to paintings and sculpture.

Originally, they bought works by American artists but became increasingly interested in European art too.

Sculptures and large-scale paintings by Germans Anselm Kiefer and Georg Baselitz feature heavily in the collection.

"I have always categorized myself as a visual person. I remember more things visually than in any other way," Donald Fisher told SFMOMA director Neal Benezra in a 2006 interview reprinted in the exhibition catalogue.

The couple didn't seek the help of curators or advisers to build their collection but instead relied on their own judgment.

They cultivated relationships with artists and regularly visited them in their studios, becoming close friends with photorealist Chuck Close and minimalist Ellsworth Kelly among others.

Native San Franciscans, the couple became involved with SFMOMA in the late 1970s, when the museum launched a Collectors Forum.

The couple originally had plans to build their own museum in the historic San Francisco area of Presidio but abandoned the idea in the face of public resistance.

Already generous donators to the museum, the couple decided shortly before Donald Fisher's death in 2009 that the collection would go to SFMOMA.

"We feel a sense of responsibility with regard to the collection and to the artists," he told Benezra in 2006.

It is also hoped that the collection will inspire other art lovers to similarly support the museum.

"I think historically great collections tend to become a center of gravity, that tend to attract more work to them," Garrels said.

"But I have to say there's already an extraordinary level of support and engagement in the area of San Francisco."

Calder to Warhol: Introducing the Fisher Collection will be on public display at SFMOMA until September 19.