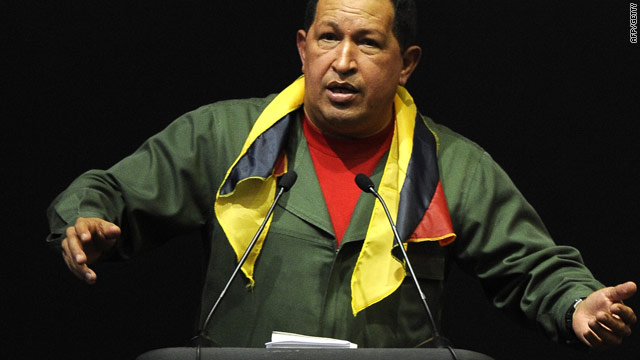 (CNN) -- Venezuelan President Hugo Chavez has deployed troops to areas near the Colombian border and says he is reviewing plans for a potential war as tension between the two nations rises.

"Three nights ago I told the vice-president. It makes me sad, I confess, that I'm reviewing war plans," he said during a phone interview on the state-run VTV network.

Special forces are moving to 10 districts near the Colombian border to be prepared in case Colombian President Alvaro Uribe issues an invasion order before he leaves office August 7, Chavez said Friday.

Colombia and Venezuela are at odds over accusations that leftist rebels have found refuge in Venezuela.

Colombia says it has photographic evidence of camps belonging to the Revolutionary Armed Forces of Colombia -- known by its Spanish abbreviation, FARC -- in Venezuela. Colombia made its case before the Organization of American States earlier this month and asked for international observers to be allowed into Venezuela to verify the presence of the guerrilla group.

Venezuela denied the accusations, and in response broke off diplomatic ties with Colombia.

On Friday, Chavez told VTV that the Colombian government's accusations "have become a threat against our sovereignty, [against] our people and against the revolution."

Chavez said surveys by the Venezuelan National Guard have proven that rebel camps do not exist within the country's borders.

He accused Colombian officials and right-wing paramilitary units of plotting his assassination, while the Colombian government has accused Chavez of supporting the rebels.

Despite the escalating tensions, the Venezuelan leader on Friday also expressed hope of restoring relations as soon as Colombian president-elect Juan Manuel Santos takes office. He told VTV that he hoped to meet with Santos as soon as possible, but stressed that in the meantime, "we won't be sucked into a war that is not ours."