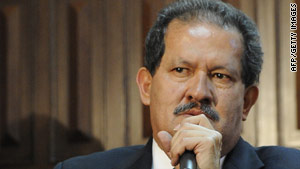 The new vice president arrived at the clinic between 6 and 6:30 a.m. (7 to 7:30 a.m. ET), said hospital spokesman Diego Cruz. Clinica Shaio is located in Bogota, the nation's capital.

The vice president's heart attack and surgery was not expected to disrupt a meeting between Santos and Venezuelan President Hugo Chavez scheduled for Tuesday.

The two heads of state will meet in Santa Marta, Colombia, to discuss how to repair ruptured relations between the two countries. Chavez broke off diplomatic relations with Colombia last month over accusations that Venezuela is harboring Marxist guerrillas who want to overthrow the Colombian government.