In Brazil, 1 dead in hotel shootout 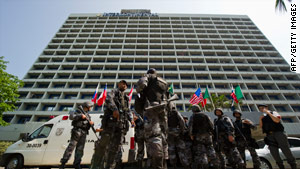 (CNN) -- One person was killed and four police officers were wounded Saturday when police in Brazil traded fire with gunmen who fled into a luxury hotel and took people hostage, police said.

The incident occurred around the Intercontinental Hotel in Rio de Janeiro, where gunmen kept 35 people hostage. Ten people have been arrested, and the hostages were freed, police said.

Police identified the deceased as 41-year-old Adriana Duarte de Oliveira dos Santos, who was wanted in connection with drug dealing.

Police said the incident began outside the hotel when they "intercepted" at least 40 people who they believe have drug-dealing connections. The gunmen were in vans, motorcycles and cars and wielded rifles and guns.

Police exchanged fire with the gunmen for about 20 minutes. An unknown number of gunmen fled into the hotel, where they took people hostage.

The gunmen kept the hostages in a kitchen as police surrounded the area, negotiated with the hostage-takers and ended the siege.

Police searched the hotel for other gunmen but couldn't find any.