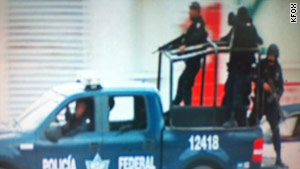 Mexican federal police respond to the scene of a gunbattle with drug traffickers in Ciudad Juarez on Saturday.
STORY HIGHLIGHTS
RELATED TOPICS

(CNN) -- A "major gunbattle" between drug traffickers and Mexican federal police broke out Saturday evening in Ciudad Juarez, Mexico, just 30 yards from the U.S. border at El Paso, Texas, causing U.S. authorities to cordon off a section of the city, according to a U.S. Border Patrol spokesman.

"The gunbattle is still going on right now," Cordero said 30 minutes after the incident began, just south of the University of Texas at El Paso.

There were no immediate reports of damage or injuries on the U.S. side of the border, Cordero said.

U.S. authorities blocked off a section of Paisano Street, which runs parallel to the Rio Grande.

The incident comes less than two months after shots fired from a gunbattle originating in Juarez crossed into El Paso and hit City Hall, damaging the building.