Wyclef Jean fighting to get name on Haiti presidential ballot 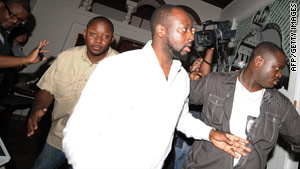 Wyclef Jean makes his way through a group of reporters on Friday in Port-au-Prince, Haiti.
STORY HIGHLIGHTS
RELATED TOPICS

(CNN) -- Hip-hop singer Wyclef Jean said Sunday he will contest a pronouncement from Haitian election officials ruling him ineligible to run for president of Haiti.

"After careful consideration and much soul-searching, I have made the decision to contest Haiti's board of elections' pronouncement stating that I am ineligible to run for the presidency of the country," Jean said in a statement. "I will be seeking a solution through legal channels, and I urge my countrymen to be patient through this process."

Jean's name was not on the list of 19 approved candidates released Friday night by Haiti's Provisional Electoral Council. At the time, Jean said, "I respectfully accept the committee's final decision, and I urge my supporters to do the same."

He was among 15 prospective candidates rejected. Elections officials did not provide a reason to reporters, but Jean's statement said they had ruled he was not a resident of the country.

Jean said Sunday that in the 36 hours following the decision, "I have been in constant conversation with my family, friends and advisers, and reading the comments of good people and supporters throughout the Haitian diaspora." He said he has also been closely monitoring "the situation on the ground, which I am happy to report has remained peaceful and thoughtful."

"I, along with my supporters, am deeply disappointed that I have been denied the chance to present my candidacy to Haiti's voters," Jean said in the statement. "I want to continue in my efforts to always keep Haiti top of mind for the world -- I don't want to give anyone the chance to forget the earthquake victims, or my impoverished homeland, rich only in human potential and kindness.

"These facts, and more, inspire me now," he said. "I am heartened by the world's focus on Haiti and its needs, as well as the great spirit of the Haitian people -- my people, and I cannot in good conscience give up my quest to lead Haiti to the greatness I know in my heart we are capable of reaching. I cannot surrender now, simply because an obstacle has been set before me; now is the time I must stand up and show Haiti -- and the world -- that my vision of a nation renewed and redeveloped is a vision for which I am willing to fight."

Jean announced August 5 on CNN's "Larry King Live" that he had submitted paperwork to run for president. Since then, his possible candidacy has met with some criticism. Haitian-American rapper Pras, who once performed alongside Jean and Lauryn Hill in the '90s group The Fugees, said he supported Jean's opponent. And actor Sean Penn, who has lived in Haiti's capital, Port-au-Prince, for months since a January 7.0-magnitude earthquake devastated the island nation, also questioned whether Jean would be able to lead Haiti.

His eligibility had been in question after claims that he had not lived in Haiti for five consecutive years prior to the election, a requirement in the nation's constitution. Jean's lawyer had said his client met that criteria.

"We in Haiti are united in our struggles, and we will be united in our victories and triumphs," Jean said Sunday. "Now is the struggle -- let us peaceably bear it and look forward to the time when our efforts will pay off, for all my fellow Haitians. Thank you for your love, understanding and support."

Jean, who was born in Haiti, shot to fame in the mid-1990s as a member of The Fugees, a U.S.-based hip-hop and reggae group. He now performs as a solo artist. He has been an outspoken proponent of Haiti through his Yele Foundation, and was one of the first celebrities to offer aid after the earthquake.