Mexican mayor gunned down inside own office 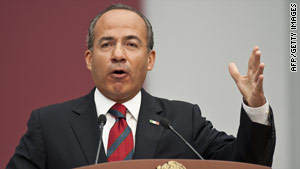 (CNN) -- The mayor of El Naranjo, Mexico, in the central state of San Luis Potosi was gunned down and killed inside his office Wednesday, officials said.

Witnesses say that four armed and hooded men stepped out of a white truck at city hall, the San Luis Potosi government said in a statement. Two of the men posted themselves outside, and two went inside and to the top floor of the building, where they entered the mayor's office and shot him, the statement said.

The attack happened in broad daylight, at about 1:30 p.m. (2:30 p.m. ET), and was brazen even by the standards of Mexico's violent drug cartel wars.

At least seven mayors in various Mexican states have been assassinated in 2010.

Mexican President Felipe Calderon condemned the "criminal and cowardly" killing of the mayor.

"The federal government reiterates that it will continue working for the security of the citizens, with all the available resources of the state," Calderon said.

Alexander Lopez Garcia assumed office in October of last year as a candidate for an alliance between the Revolutionary Institutional Party (PRI), and the Ecologist Green Party.

CNN's Mariano Castillo and Nick Valencia contributed to this report.