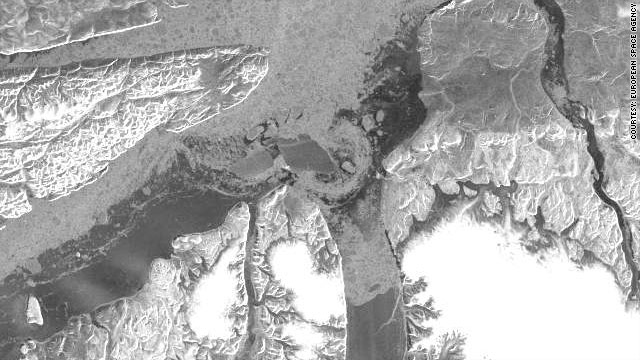 An image from ESA's ENVISAT satellite shows the ice island has split in two while passing through the Nares Strait.
STORY HIGHLIGHTS

(CNN) -- A massive ice island four times the size of Manhattan that broke off the Petermann Glacier early last month has split in two.

Satellite images show that the ice island broke in two after repeatedly smashing into Joe Island, a small rocky outcrop in the Nares Strait, west of Greenland.

"In the satellite imagery, you can hardly see the island because it's so much smaller than the ice island, but it's there; it's a piece of rock," said Andreas Muenchow, an associate professor at the University of Delaware.

The ice island hit Joe Island last week, and since then, combined forces of ocean currents and strong winds have weakened its structure.

"The forces of the ocean currents and the winds wiggling it on and off the island were too much," Muenchow said.

The exciting stuff as far as we are concerned is trying to understand the physics of the piece intact.
--Andreas Muenchow, University of Delaware
RELATED TOPICS

The ice island made headlines in early August, when it split from the Petermann Glacier, before moving up the Petermann Fjord and then into the Nares Strait in early September.

It was the biggest break-off in 140 years, according to Muenchow, whose team consulted the earliest known reports about the glacier.

"We went back to 1876 to find all glacier positions that have ever been reported. From this analysis, we found that this indeed was the largest event that has been observed at Petermann, but that the trend of area lost by this glacier over the last 140 years is indistinguishable from zero," Muenchow said.

He and international teams spanning at least nine time zones have been tracking the ice island hourly since it broke off from the main glacier. Muenchow predicts the main pieces will be found off the Canadian province of Newfoundland and Labrador in two to three years' time.

While the floating ice island has captured the public's imagination, he says, scientists are more interested in what its departure means for the glacier left behind.

"The exciting stuff as far as we are concerned is trying to understand the physics of the piece intact," Muenchow says. "As far as I'm concerned, the piece that has broken off has gone."

He said it is still unclear how the Petermann Glacier will react after losing such a large proportion of its mass.

"Because you're changing the balance of forces by removing a large piece, what will happen next is that it will probably start moving forward faster than it has been before because it has to find a new equilibrium."

By studying NASA satellite images, his team has determined that Petermann Glacier has been moving forward and backward in 20- to 30-year cycles. What is not clear how much global warming has contributed to its melting and movement, and how much is attributable to the cycle observed.

Greenland is known to have been losing mass over the past 10 to 20 years.

In testimony to the Select Committee on Energy Independence and Global Warming last month, Richard Alley, professor of Geosciences at Pennsylvania State University, said the ice loss was due to "a warming world."

"Greenland is losing mass at an accelerated rate and that appears to be because it's melting more on top from warmer air, and it is dumping more icebergs into the ocean from warmer water as well as warmer air," he said.

To try to understand what may happen in future, Muenchow is delving further into the past. He is trying to secure access to classified spy satellites which may provide more clues to the movement of the ice.

"Right now I'm looking at the data already has been declassified and I'm hoping that there are people within governments that make decisions or have decision making powers on what data to declassify that they will consider declassifying imagery to further our understanding of climate change."