Mexican newspaper to cartels: 'We do not want more deaths' 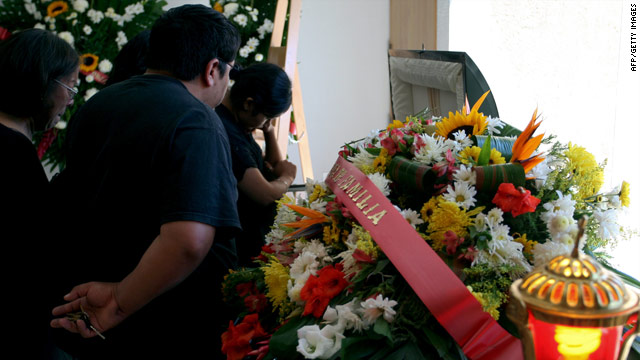 (CNN) -- On the same day friends and family buried slain photographer Luis Carlos Santiago Orozco, the newspaper he worked for, El Diario, in an unprecedented move published an open letter to the drug cartels operating in Ciudad Juarez, Mexico.

No newspaper in Juarez has ever published an editorial directly addressed to the cartels that are battling for the trafficking corridor in the city. The letter, written by the editorial staff of the newspaper and published, pleaded with the drug gangs to end violence against journalists.

"You are, at present, the de facto authorities in this city," the newspaper's letter to the cartels said, "because the legal institutions have not been able to keep our colleagues from dying."

Santiago, 21, was killed last week while sitting in a parked car outside a shopping mall in Juarez. He is the second journalist from the paper to be killed in the last two years.

He was shot multiple times from close range, and a colleague with him was wounded. Authorities have not linked the death to the cartels, nor have authorities offered any speculation on who might have committed the killing.

"We do not want more deaths," the newspaper's letter to the cartels said Sunday. "We do not want more injuries or even more intimidation. It is impossible to exercise our role in these conditions. Tell us, then, what do you expect of us as a medium?"

The letter continued: "This is not a surrender. Nor does it mean that we've given up the work we have been developing. Instead it is a respite to those who have imposed the force of its law in this city, provided they respect the lives of those who are dedicated to the craft of reporting."

A "narcopinta," or graffiti-written message left by cartels, was found later in the city denying responsibility for Santiago's shooting, local reports said. The message was reportedly written by La Linea, the armed branch of the Juarez Cartel.

Earlier Sunday, at Santiago's funeral the climate was grim. Colleagues of the young intern spoke about a life ended too soon. For safety reasons, they asked not to be named.

"He was a youth with a lot of enthusiasm and desire to learn," a colleague of Santiago said. "It's very sad. He wanted to learn quick and to be recognized as a photographer."

Santiago's relatives remained incredulous about the entire turn of events. The youth, they said, had problems with no one.

"I wish I got to have known more about Carlos because he was a good person. He was very talented and very attentive. In a short time, he won the affection of all of us around here in El Diario," a reporter with the paper said.

Santiago died of at least seven gunshot wounds from a 9mm gun fired at short range. A second photographer from El Diario who was also in the car at the time of the shooting was injured during the cross-fire. He remains hospitalized, state authorities said.

According to local reports, preliminary versions of what transpired before the shooting indicated that on their way to the shopping mall it was possible the two photographers could have taken a photo that bothered someone.

State authorities have said they are investigating any connection between the shooting and Gustavo de la Rosa, a prominent human rights attorney and activist in Juarez. It was de La Rosa's car that Santiago was in when he was killed. The state attorney general's office had been investigating whether de La Rosa may have been the intended target.

A phone call Sunday by CNN to the Mexican state attorney general's spokesperson was not immediately returned.

De la Rosa has been threatened from time to time in recent years. The attorney recently launched an investigation into the abuses by soldiers and federal police officers during detentions and military checkpoints, local reports said.

Journalist Arturo Chacon in Juarez contributed to this report.