Rescue cage arrives at Chile mine 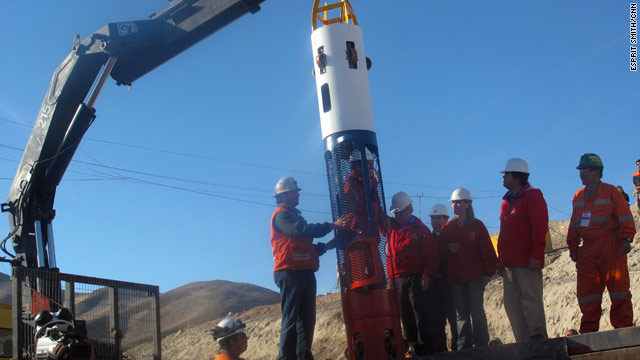 Chilean government and mine officials demonstrate the newly arrived "Phoenix Capsule" at the San Jose mine Saturday.
STORY HIGHLIGHTS

Copiapo, Chile (CNN) -- Rescue workers in Chile took delivery Saturday of a 420-kilogram (924-pound) cage that is expected to haul 33 trapped miners back to the surface.

Authorities have dubbed the device the "Phoenix Capsule" because they say it will help the miners rise up again and give them a new life.

The first rescue capsule arrived at the San Jose gold and copper mine Saturday afternoon, draped in plastic sheeting. About a half-hour later, Chilean Mining Minister Laurence Golborne and Health Minister Jaime Manalich, accompanied by rescue engineers, unveiled the capsule. It was painted in the red, white and blue colors of the Chilean flag.

Relatives of the trapped miners saw the capsule for the first time and began applauding.

"We're taking one step after another. This is one more step but we have a long way still to go," he said.

Cristina Nunez, wife of trapped miner Claudio Yanez, was one of a handful of relatives permitted to try the capsule for size.

After emerging from the device she said: "I'm very happy. Claudio will fit inside perfectly because he's one of the skinnier ones. But all 33 will fit fine. This bring us a step closer to the rescue."

Video: 24 hours in a Chilean mine
I'm very happy. Claudio will fit inside perfectly because he's one of the skinnier ones.
--Cristina Nunez, wife of trapped miner Claudio Yanez, after trying out the "Phoenix Capsule"
RELATED TOPICS

The hi-tech capsule will be equipped with an oxygen supply, communications equipment, retractable wheels to help it travel up the rescue shaft and an escape hatch in case anything goes wrong.

Its arrival Saturday, far ahead of the government's initial estimate that was around the end of next week, is the first hint rescuers could be accelerating the timeline for recovering the men from a cavern some 700 meters (2,300 feet) underground.

Asked about a media report citing Chilean government sources saying the rescue could come as early as October 15, Golborne replied: "This will be over when it's over. There's no use speculating."

He said the effort was still on schedule to rescue the men by the first week of November, but added workers would do everything possible to push that date up.

"Obviously we're going to try and speed up the process as much as possible but there's no sense trying to guess what it will be. We're dealing with hard rock and there could be technical difficulties. All these contingencies mean we are scheduling for the first days of November," Golborne said.

By 8 a.m. Saturday, the Strata 950 drill, dubbed Plan A, had bored a 15-inch (33 centimeter) diameter hole 442 meters (1,458 feet) into the rock. That drill must make two passes to carve out a 28-inch diameter hole wide enough to hoist the miners through.

The Plan B operation, using a Schramm T-130 drill, is deepest at 175 meters (577 feet) with the final diameter of 28 inches (70 centimeters). That drill has been hit by a series of technical problems in the last week and the drill hammer has fallen off at least three times. Early in the week, the drill bit fell right down into the mine workshop.

Plan C, a Rig 421 oil rig, looked to be the fastest option on paper but appears so far to have struggled with hard rock conditions. It was at 62 meters (204 feet) at 8 a.m. Saturday.

At an early afternoon press conference near the entrance to the San Jose mine, Health Minister Jaime Manalich outlined plans for the final phase of the rescue.

He said two rescuers -- a rescue expert and a skilled paramedic -- would make the first journey in the Phoenix Capsule and drop the 700 meters into the mine.

They would carry out a medical check of the miners and decide the order in which they would be extracted based on their physical and mental conditions. He said the ride from the cavern, where the miners have been holed up since August 5, back to the surface would take an estimated 15 minutes.

Manalich said there was no plan to sedate any of the miners for the journey.

"Compared to the 50 days the miners have so far spent down there, the 15-minute ride back will be like nothing," he said.

Once on the surface, the miners will be taken to a field hospital set up near the extraction hole and be given antibiotics, intravenous fluids and an eye check. After initial examination and triage they will be transferred to an observation area within the mine complex, where they would have their first reunion with "one or two family members," Manalich said.

Once all the miners are extracted, Manalich said they would be flown by helicopter to Copiapo Regional Hospital, a 15-minute flight. He said each of the miners would be kept at the hospital "without exception" for a minimum of two days for stabilization and observation.

Manalich said the most immediate risk to the miners would be the possibility of damage to their retinas as they face bright sunlight after weeks underground. He also said medics would seek to immunize the miners against common germs on the surface, which they have not been exposed to recently.

He added the miners could face a drop in blood pressure as they are brought back to the surface and concluded by saying they would be monitored for months for possible signs of post-traumatic stress.