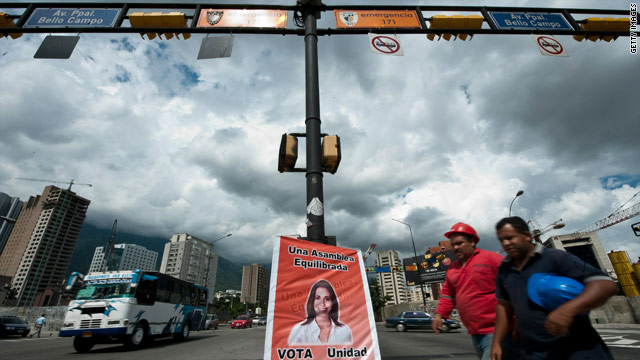 Two men pass by a poster of an opposition candidate to the national parliament in Caracas on September 24.
STORY HIGHLIGHTS

(CNN) -- Voters in Venezuela headed to the polls Sunday to decide 165 seats out of 167 in the country's National Assembly.

Even though Venezuelan President Hugo Chavez is not on the ballot, he casts a large shadow over the elections. His ruling United Socialist Party of Venezuela (PSUV) holds 137 seats, and he has taken an active role in this year's campaign.

Despite one of the highest murder rates in Latin America and an economy that is just beginning to recover from a recession, Chavez maintains support among many of the country's poor.

But that support isn't as strong as it once was. Venezuela has also faced electricity shortages and other infrastructure problems that could make Chavez's party more vulnerable than in the past.

Voting was expected to stop at 6 p.m., but election officials said polls would remain open so long as people were waiting in line to vote. Official results are expected hours after the stations close Sunday night.

On the eve of the elections, Venezuelan Interior Minister Tareck El Aissami told the state-run VTV network that someone had hacked into Chavez's Twitter account.

El Aissami said his office was investigating at least three tweets sent from Chavez's account that were not written by the president. He said a formal investigation request would be made to Twitter through the U.S. Embassy in Venezuela.

In protest against Chavez, the opposition boycotted the last parliamentary elections in 2005.

The move left opponents of Chavez without a voice in the national assembly. It also gave the PSUV a supermajority that allowed for quick passage of many of Chavez's pet projects.