Did a butterfly save two miners' lives in Chile? 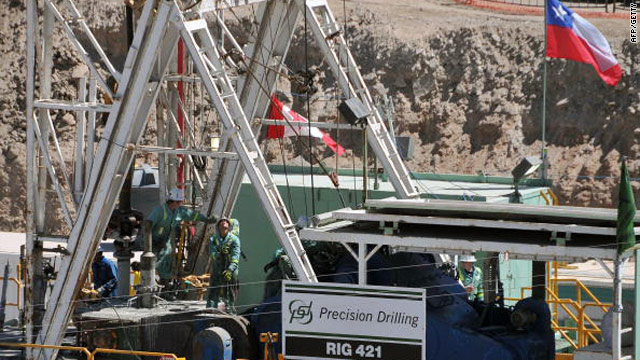 The miners and the butterfly
STORY HIGHLIGHTS

In the tent village christened "Camp Hope," at the gates of the San Jose mine complex, close-knit miners' families huddle together and light a fire.

They tell tales in the glow of red-hot embers. And the one everyone wants to hear these past few nights is an almost supernatural tale about the miner and the white butterfly.

The story was first recounted in the spidery lines of a letter penned by Jorge Galeguillos, one of the 33 miners trapped half a mile deep in the bowels of the earth.

Video: 24 hours in a Chilean mine

It was early afternoon on August 5, and Galeguillos was heading back down into the mine aboard a Nissan Terrano pick-up truck. His friend, former soccer star Franklin Lobos, was at the wheel.

"We had been up to the workshop and as we were driving back down, a slab of rock caved in just behind us. It crashed down only a few seconds after we drove past. Just ahead I saw a white butterfly," Galeguillos wrote in the two-page letter to his brother Eleodoro, also a miner.

"After that, we were caught in an avalanche of dirt and dust. I couldn't see my hand in front of my face. The tunnel was collapsing and the rocks buried a backhoe. A water tank lower down was almost completely buried too," he continued.

A huge slab of rock collapsed behind them, totally blocking the mineshaft between Level 190 (the level corresponds to the height above sea level measured in meters) and Level 335, a level higher up the mine closer to the entrance.

In turn, that collapse triggered a series of smaller cave-ins and rockfalls further down the mineshaft, according to rescue workers.

As the dust cleared, Lobos and Galeguillos began driving again and managed to negotiate their way around the other rockfalls that had partially blocked the lower reaches of the 4-meter-wide tunnel. They were eventually able to reach 31 fellow miners, who were, by then, huddled for safety in the 50-square-meter refuge on Level 100.

Galeguillos' brother says he has no rational explanation about how a tiny white butterfly could have flown more than 500 meters deep into the mine.

But like most miners in this spartan desert region, he's a fervent Catholic and deeply superstitious. He's also a deep believer in the folklore handed down by what he calls "the old people" -- lessons passed by word of mouth from grandfather to father to son.

Eleodoro Galeguillos seems a little self-conscious when asked about the white butterfly. Perhaps he thinks his explanation sounds a little superstitious, or perhaps he doesn't want to let everybody in on ancient secrets.

"In the countryside, our grandfathers, who were peasant farmers, knew it was a good omen to come across a white animal in the dark of night," he began.

"Down in the mine, I don't really know what that butterfly was. Maybe it was a little angel passing in front of them, or a little god saying, 'Hurry up, there's danger down here,'" Eleodoro Galeguillos said.

What he does seem sure of is that the butterfly protected the lives of his brother and his friend.

In the countryside, our grandfathers, who were peasant farmers, knew it was a good omen to come across a white animal in the dark of night
--Eleodoro Galeguillos, brother of trapped miner Jorge
RELATED TOPICS

"They were saved by the skin of their teeth. The cave-in was going on above and below them. It was already burying things all along the tunnel," Galeguillos explained.

At the entrance to the San Jose gold and copper mine, mining consultant Miguel Fortt regularly visits the families of the trapped miners as they wait for news of the rescue operation.

He's a rescue expert and helped coordinate the first phase of the search for the miners immediately after the August 5 cave-in. He's not given to flights of fancy.

Fortt explains that small white butterflies can sometimes be seen fluttering around the short-lived purple flowers that blossom for a few hours in the Atacama desert at certain times of year when the fog or dew is heavy. They call that seasonal phenomenon here the "flowering desert."

The nearest patch of such flowers is about 2 kilometers from the mine. But Fortt believes it would be extremely rare for one of the insects to fly 500 meters deep into a mineshaft.

The most logical explanation he believes is that the butterfly was sucked into the mine's ventilation chimney in a downdraft generated by the collapse -- what he calls "the piston effect". But it's clear he's not convinced by his own logic.

"People who are religious would call this a miracle. From a scientific perspective, the butterfly may have flown into the mine on air currents. You can draw your own conclusions but that butterfly saved their lives," Fortt said.

Science or superstition, Fortt said that Galeguillos and Lobos slowed their truck down so they could take a closer look at the curious white butterfly. That stopped them driving headlong into the rockfalls triggered by the initial, massive collapse.

He has a copy of Jorge Galeguillos' letter and mention of the butterfly seems to have had a profound impact on those who hear of it.

"I've shown some people that letter and they've cried when they read about the butterfly that passed in front of them," Fortt said.

From the cavern 700 meters underground, Jorge Galeguillos has not elaborated about the butterfly. From his letter, it's clear he's having a tough time writing and needs his reading glasses.

"That is all for now," he says. "Sorry I can't write any more but I need my glasses and my grip on my pencil is not too good right now."

But the few details he has revealed seem to leave little doubt in the minds of relatives waiting up on the surface.

As they huddle around campfires on a starry night in the frigid Atacama desert, the families repeat the tale of a white butterfly they say was really a guardian angel.