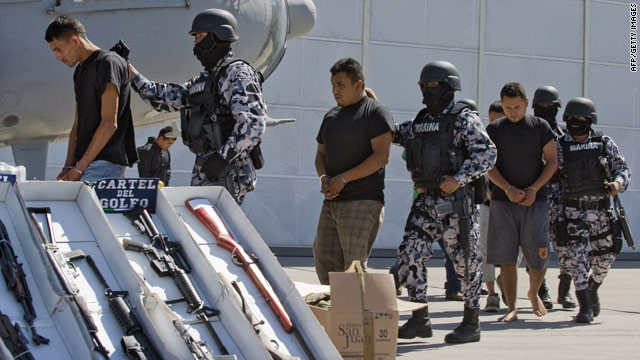 Members of Mexico's Gulf Cartel are shown to the press after being detained in Tamaulipas State on Tuesday.
STORY HIGHLIGHTS
RELATED TOPICS

At least one marine and eight cartel members were killed in the firefights, navy spokesman Jose Luis Vergara said, according to the state-run Notimex news agency.

The operations against the cartel were based on information from the navy's intelligence apparatus and the national intelligence agency, Vergara said.

Those arrested were involved in drug trafficking, extortion and kidnapping, he said.

The suspects were transported to Mexico City to be questioned further by authorities.

The Gulf cartel is one of Mexico's major drug-trafficking organizations, based In the city of Matamoros, across the border from Brownsville, Texas. The cartel is currently in a turf battle in the region with its former enforcers-turned-rivals, the Zetas cartel.