State of emergency in Ecuador extended 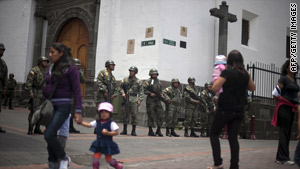 (CNN) -- A state of emergency in Ecuador has been extended to Friday, the country's government announced, as investigators watch videos and review photographs to identify officers involved in last week's police uprising. It was originally set to expire Tuesday.

The state of emergency was prolonged because of "shameful acts and protests" by some national police officers in front of the headquarters of the National Assembly, in an effort to impede its work, the state-run Andes news agency reported.

The decree mobilizes the military to be in charge of securing the country instead of the police. The goal is to allow the assembly to continue with its work.

"The government is very, very saddened by the subject and feels there is nothing to celebrate, but things are gradually returning to normal," Alexis Mera, the president's legal secretary, said in a statement issued before the state of emergency's extension.

President Rafael Correa was physically attacked by police in a day of protests that paralyzed the country Thursday.

Correa and other South American leaders have described the events as an attempted coup. Troops rescued Correa in a dramatic shootout with officers at a hospital, where the president said he was held for more than 10 hours.

But a congressman from the opposition party told Colombia-based Caracol TV, a CNN affiliate, that the day's events were provoked and planned by Correa.

"Everything was staged by the president to hide the extreme corruption and to hide the poverty, hunger and unemployment that have risen to an alarming level," said Gilmar Gutierrez, a congressman and brother of former president Lucio Gutierrez -- the man Correa has claimed was behind what he called the coup attempt.

"There was no coup," Gilmar Gutierrez said Monday. "Everything was provoked by the president, who is using millions of propaganda resources."

Police officers have said they were angered by a new law that would take away their bonuses and reduce their compensation. Correa, who was roughed up and hit by tear gas, said the law would do no such thing and the police officers had not even read it.

A video by Ecuavisa showed a defiant Correa standing at an upper floor window of the hospital Thursday, shouting to a crowd of supporters who had gathered outside the hospital, "If they want me, here I am," and then ripping his necktie loose.

Hundreds of troops loyal to the president later arrived at the hospital and rescued him after exchanging gunfire with police.

Afterward, Correa delivered an impassioned speech from the balcony of the presidential palace, vowing not to negotiate under pressure.

In a statement released by the government, Interior Minister Gustavo Jalkh said at least four people were killed in the standoff -- two soldiers, a police officer and a university student. Nearly 200 others were injured in unrest throughout the country, Ecuador's health minister said.

The chief of the national police resigned Friday.

Correa has said that the police involved were trying to kill him, but pledged to continue supporting the 42,000-member national police force.