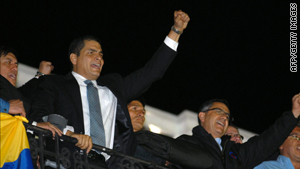 President Rafael Correa has called Thursday's police uprising an attempted coup, a characterization supported Wednesday by Jose Miguel Insulza, the secretary general of the Organization of American States. Police had taken to the streets to protest government austerity measures they said would limit bonuses and compensation.

Correa had gone to meet with some of the protesters but was surrounded by a heckling crowd that jostled him and hurled insults. Someone then fired a tear gas canister at Correa and a man was seen on TV video punching the president and trying to yank his gas mask off.

Correa was led away and taken to a hospital, where he was held until the military attacked the police and liberated the president several hours later.

The reported police radio transmissions released by the Andes news outlet late Tuesday night took place while Correa was being held at the hospital. CNN could not independently verify the authenticity of the audio material.

"They should kill Correa so this will end," an unidentified man said on the recording. "Kill Correa and this demonstration will end."

Another man on the recording indicates that police wanted Correa to sign a decree guaranteeing unspecified benefits, but which likely refers to the austerity measures.

"The gentleman who is supposedly president will not leave without signing the attributions that correspond to the national police," the man says. "That gentleman has to assure our complete amnesty."

Yet another man threatens Correa, calling him a vulgar name.

But not all the voices heard on the recording urged violence against Correa.

"Let's not talk about assassinations," a man says. "We are police. We are representatives of authority. Let's defend our rights, but that gentleman has to leave, to quit being president."

Among those arrested was retired army Maj. Fidel Araujo, who was seen in a video instigating the protesters, Andes said.

Araujo has denied any connection with the uprising, said CNN affiliate Ecuavisa TV.

The suspects are being held for 48 hours while authorities determine whether to file charges.

Correa has said Gutierrez, who was president from 2003 to 2005, was behind the uprising.

Gutierrez told CNN en Espanol last week he was not involved. He has been out of the country but was expected to return to Ecuador on Wednesday.

The government said at least four people were killed in the firefight between the military and police -- two soldiers, a police officer and a university student. Nearly 200 others were injured in unrest throughout the country, Ecuador's health minister said.