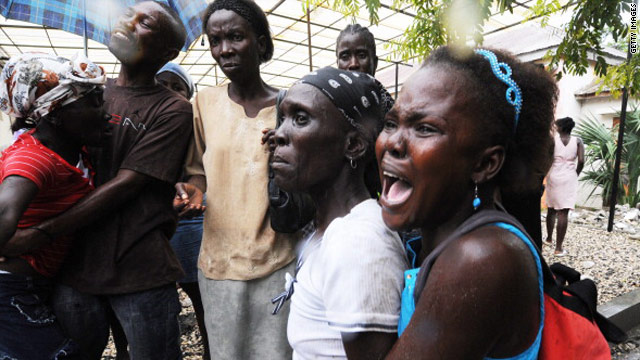 (CNN) -- The death toll from a cholera outbreak in Haiti has risen to more than 150 confirmed deaths, according to health officials with the U.S. Centers for Disease Control and the U.S. Agency for International Development.

At a joint news conference held Friday, Dr. Rob Quick and Dr. Carleene Dei discussed the outbreak and efforts to work out a containment strategy.

The CDC will send an 11-member team to Haiti over the next few days to find out which antibiotics will be most effective in treating the cholera outbreak.

US AID will provide supplies needed to set up treatment centers. The group has already prepositioned 300,000 oral re-hydration kits and are distributing water purification kits in affected areas.

Officials also confirmed that all the reported cases are in the Artibonite and Central Plateau regions, north of Port-au-Prince. They said they're working to contain the outbreak there and prevent its spread to the densely populated capital.

Chaos reigned acrooss the Artibonite and Central Plateau regions Friday, as hospitals overflowed with people rushing to get help from the fast-moving cholera outbreak.

1,526 people have been sickened in the outbreak, said Imogen Wall, the U.N. humanitarian spokeswoman in Haiti.

Snow said that "constant miscommunication and confusion" have hindered aid efforts, though he expressed hope things may improve Friday as more help comes in.

On Friday, Haitian Prime Minister Jean-Max Bellerive called the cholera outbreak "unprecedented" and said authorities were working with the Centers for Disease Control and Prevention to understand what happened.

Ian Rawson, director of Hopital Albert Schweitzer Haiti near Verrettes, said patients began showing cholera-like symptoms Saturday. The pace picked up significantly Tuesday and beyond, though he said the situation was under control Friday at his 80-bed facility about 16 miles east of Saint Marc.

He said that his organization on Thursday helped install one water filtration unit, capable of providing 10,000 gallons of clean drinking water, and planned to install another two Friday. But some parts of the impoverished nation remained out of reach, he said. One village had been totally cut off by floodwater.

Operation Blessing was among many nonprofit organizations, nations and international bodies in the region offering help. In a State Department briefing Friday, spokesman P.J. Crowley said members of several U.S. agencies were "on the ground" to facilitate and provide clean water and ensure sound sanitization. U.N. staff, too, have sent tents and rehydration supplies to the region, Wall said.

CNN's Azadeh Ansari and Alanne Orjoux contributed to this report.