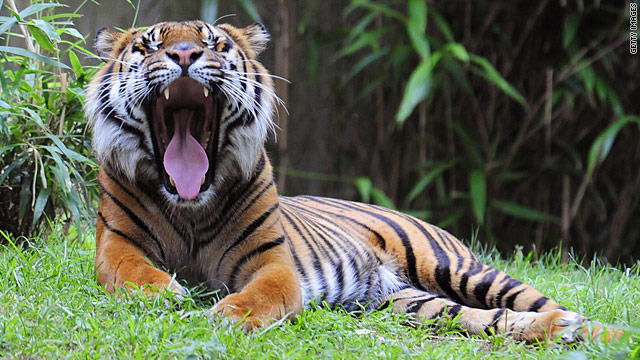 The WWF and TRAFFIC say that there are yawning gaps in U.S. regulation of tiger ownership which could fuel illegal trade.
STORY HIGHLIGHTS

(CNN) -- Rising numbers of captive tigers in the United States are putting citizens at risk and could be fueling illegal trade in animal parts, which threatens their survival in the wild, conservationists have warned.

"Tigers Among US," published by the World Wildlife Fund (WWF) and TRAFFIC, the wildlife trade monitoring network estimates that there are more than 5,000 tigers in captivity in the U.S. compared with around 3,200 that remain wild across Asia.

While some tigers are housed in zoos, many more are privately owned, often free to roam backyards, urban apartments and are generally kept in "deplorable conditions," the report says.

But its the size of the enclosures that is most distressing, Henry says, "when you know tigers are supposed to be ranging over hundreds and hundreds of acres."

Current U.S. regulation on tiger ownership is "a patchwork of federal laws" full of "exceptions, exemptions and loopholes," the report says.

A majority of U.S. states (28) don't allow citizens to keep tigers as pets, while 17 have laws which regulate their ownership.

"We want to know where all these animals are, who owns them, when they're sold and transferred, when they are born, when they die...
--Leigh Henry, WWF
RELATED TOPICS

But in some states there are no regulations at all, making it easier to own a tiger than to adopt a dog, with sometimes tragic consequences.

In 2003, a 10-year-old boy was killed by his aunt's pet tiger in Wilkes County, North Carolina.

In the same year, celebrity tiger handler Roy Horn (of Siegfried and Roy fame) was mauled during a performance at Las Vegas's Mirage Hotel.

Nevada and North Carolina are two of eight U.S. states (Alabama, Idaho, Ohio, South Carolina West Virginia and Wisconsin are the others) which currently have no laws regulating private ownership of tigers.

These yawning gaps in regulation could be resolved by implementing "a central reporting system and database run by the federal government and that would be required for all tigers in the U.S. without exception," Henry says.

"We want to know where all these animals are, who owns them, when they're sold and transferred, when they are born, when they die, so we have a better grasp on what going on with this immense population of tigers to ensure they are not filtering into illegal trade," Henry said.

It is hard to put an exact figure on just how lucrative the black market is, Henry says, but she estimates that a tiger broken up and sold in parts could fetch anywhere between $30,000 to $100,000.

Find out more about captive tigers in the U.S.

Some states, like Iowa, are leading the way. They recently implemented a ban on private ownership, Henry says.

"They put in this great regulatory system which requires DNA identification, photo identification and very strict deporting and registration systems for the tigers already in the state," Henry told CNN.

The U.S. is one of the world leaders in the promotion of tiger conservation but the U.S. also has a responsibility to manage tigers in its own backyard, Henry says.

"By clamping down on this issue, we can better cooperate with other nations holding large numbers of captive tigers to prevent trade in these animals from threatening their wild counterparts," Henry said.

This latest assessment updates a 2008 TRAFFIC report "Paper Tigers? The Role of the U.S. Captive Tiger Population in the Trade in Tiger Parts."

World leaders will gather in St Petersburg, Russia at the end of November for a Global Tiger Summit to discuss proposals which will further protect breeding populations, habitats and inhibit poaching and international trade.

Their long term goal is to double the worldwide tiger population in the wild by the time the Chinese celebrate the Year of the Tiger again in 2022.