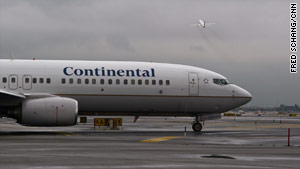 The air marshals were arrested in Brazil after they arrested the wife of a Brazilian judge aboard a Continental flight.
STORY HIGHLIGHTS
RELATED TOPICS

Washington (CNN) -- Two U.S. air marshals who arrested the wife of a Brazilian judge on a flight to Rio de Janeiro -- and were themselves arrested and had their passports confiscated by Brazilian authorities -- fled the country using alternate travel documents rather than face what they believed to be trumped-up charges, sources said.

The incident occurred on October 1 on Continental Flight 128 from Houston, Texas, to Rio de Janeiro. During the flight, a female passenger who appeared to be intoxicated tried to serve herself drinks by going to the plane's galley, one source said. The plane's crew asked air marshals to intervene, and two marshals approached the woman, who began struggling with them.

Two sources said the woman bit one of the air marshals, and she was handcuffed and placed under arrest.

"They (Brazilian officials) did not want them to leave. They were not free to go," one U.S. law enforcement source said.

But the air marshals used alternate travel documents and quietly departed the country on a commercial flight that same day without the knowledge of the Brazilian court officials who had sought their detention.

The air marshals had not recovered their passports when they left, the sources said.

A Transportation Security Administration official, contacted by CNN on the day of the incident, confirmed that air marshals had confronted a "disruptive passenger" on Flight 128, and said that U.S. officials were working with their Brazilian counterparts to resolve "an issue," which the official declined to discuss.

Shortly before midnight the day of the incident, the TSA official said the air marshal team had left Brazil, but the official did not elaborate on the circumstances.

U.S. officials on October 1 and again this week declined to discuss the circumstances in which the air marshals left Brazil. But, commenting about the incident on board the aircraft, an official said, "We believe our federal air marshals acted appropriately within the provisions of the Convention on Offenses and Certain Other Acts Committed on Board Aircraft (Tokyo Convention)."

Air marshals and union representatives contacted by CNN say it is important that Brazil and other nations recognize law enforcement actions taken by air marshals during international flights.

"In theory we're all working together to combat the threat of terrorism and we should not let egos or marital relations impact proper procedure and legal protocols," said Jon Adler, national president for the union that represents air marshals.

Numerous sources said the issue is still unresolved. According to court documents in Brazil, after the air marshals missed a scheduled court appointment on October 6, the court contacted the U.S. Embassy in an attempt to get the air marshals' addresses.

On Tuesday, Homeland Security Secretary Janet Napolitano met with Brazilian Minister of Defense Nelson Job to discuss strengthening the global aviation system. The United States and Brazil signed a "joint statement of intent on aviation security." A Department of Homeland Security official said the parties did not discuss the Continental Flight 128 incident or its aftermath.

Sources said they believe the two agents remain charged in Brazilian courts. They did not know if the agents' passports had been returned to them or the U.S. government.

State Department officials have declined to comment on the incident, but said it is not affecting relations with Brazil.

"We've got broad, deep relations with Brazil," State Department spokesman Mark Toner said. "We have many, many areas of cooperation with Brazil. And on those areas where we have had disagreements, or rather issues to address, and challenges, we've worked through them quite effectively."

A call to the Brazilian Embassy in Washington on Thursday was not immediately returned.