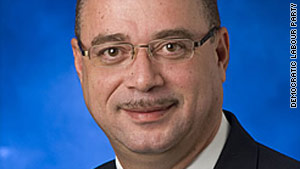 Deputy Prime Minister Freundel Stewart was sworn in as Thompson's successor hours after his death, according to the state-run Caribbean Broadcasting Corporation (CBC).

Elected as prime minister in 2008 on a platform of community development, Thompson was credited for restoring the Democratic Labor Party to a parliamentary majority, according to the Barbadian government website.

Thompson had served in government since 1991, and his main priorities were decentralizing government, strengthening social services and empowering the Barbadian economy, the government said.

"Barbados has lost its loyal son and faithful servant before he had the time to realize his lifetime dreams. ... We enjoyed and endured his public service experiences. He was always indebted to the people and the party for affording him the opportunity to see the mountain top," Thompson's wife, Marie-Josephine Mara said in a statement to the CBC.

Thompson was born on Christmas Day in 1961, one of seven siblings. Thompson is survived by his wife and three daughters.