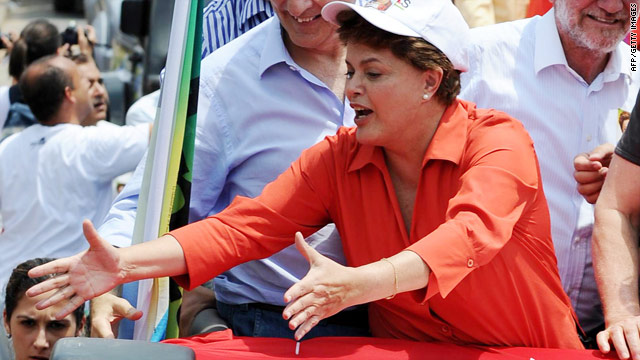 Dilma Rousseff was once one of most Brazil's most wanted fugitives, branded by some as a "subversive Joan of Arc."
STORY HIGHLIGHTS

(CNN) -- Dilma Rousseff, who was elected as Brazil's first female president on Sunday, once told reporters that as a typical Brazilian girl in the 1950s she dreamed of becoming a ballerina.

But as the 1960s saw the emergence of a brutal military regime in her country, she had to make some hard choices.

"I quickly discovered that the world had no place for debutantes," Rousseff told reporters.

The daughter of a well-educated Bulgarian emigre, Rousseff took piano lessons as a child and was educated in a French-speaking Catholic school.

But as a fighter for Brazil's left-wing guerrilla movement in 1969, she exchanged a wedding dress for fatigues and went underground, taking on names such as Luiza, Wanda and Estela to avoid the authorities.

With her trademark pixie-short hair style and thick glasses, she became one of most Brazil's most wanted fugitives, branded by some as a "subversive Joan of Arc."

Charged with subversion by the right-wing military government, she suffered through the disappearance and torture of her Marxist companions, some of whom died.

When the military finally arrested her in 1970, Rousseff, now 62, says she was severely tortured in order to give up secrets.

She told Istoe magazine in 2008 that as a prisoner she was often tied up to the infamous "parrot's perch," a torture device used by Brazil's military police in which the victim is suspended between two metal platforms.

After her release in 1972, the military government forbade her to engage in political activities.

With the return of democratic rule in the mid-1980s, Rousseff held a number of political positions, one of them, as energy secretary in Rio Grande do Sul state, where she won praise for her handling of Brazil's largest power outage and turning the state into a road map for making the country an energy powerhouse.

The guerrilla organizations with which she was involved, such as the National Liberation Command, sought to gain control of the government by force. They took inspiration from the Cuban revolution and other Latin American insurgent groups such as Colombia's FARC. But Rousseff dismisses stories that she knows how to handle an AK-47 and that she committed any violent crimes as "legends."

"My involvement was just political," she told TV host Jo Soares in 2008. "I used to have more than a 9th, or 10th degree of myopia," referring to her poor eyesight.

In her official campaign video, President Lula said Rousseff's past is nothing to apologize for and compared her fight against the military regime to other heroes.

"One part of Dilma's life story reminds me of [Nelson] Mandela's," said Lula.

"I remember Mandela once said that he only joined the struggle because they never gave him any other choice. Time went by, and what has happened? He has become one of the greatest symbols of peace and unification in the world."

Some of her critics have slammed her involvement in the guerrilla movement.

During a congressional hearing in 2008, she silenced a senator and won applause for answering criticism that she broke the law in the 1960s for lying to the Brazilian police and for engaging in anti-military subversive activities.

"I was 19 years old, I was in jail for three years and I was barbarously tortured, senator," she said in her televised statement.

"Anyone who dared tell the truth to their torturers would compromise the lives of their friends. They would deliver them to their deaths."

Rousseff returned to school in 1972, graduating in 1977 in economics, according to her official biography.

Her ability to blend her left-wing agenda with entering into pragmatic capitalist alliances is one of the reasons she was tapped as energy minister in 2002.

Rousseff is credited with the democratization of Brazil's energy through a program called Luz Para Todos, "Light for All," bringing electricity to poor farmers.

In 2009, she was diagnosed with an early-stage lymphoma. After undergoing months of chemotherapy, she proudly lifted her wig in front of the cameras when she was declared cured.

Rousseff, who will take office January 1, has acknowledged that being a woman in office has not been easy, and complained of the media's treatment of her as Brazil's "iron lady" after several aides complained about the way she treated subordinates.

"To take care of the government sometimes is like being a mother," she told TV Globo. "You have to ask for results."

Rousseff takes conservative stances on some women's issues. "I am against abortion, I am pro-life," she told Aparecida TV, a Catholic network.

Rousseff is divorced and has a daughter.