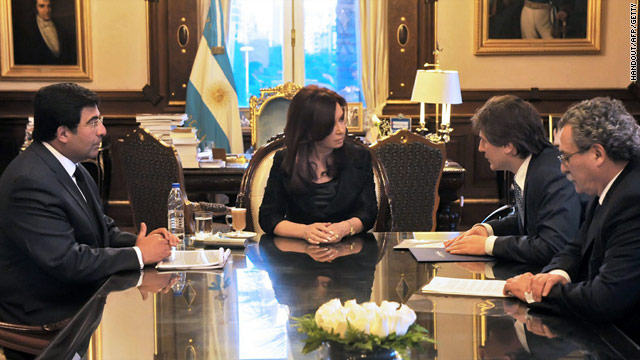 (CNN) -- In a nationally televised address Monday, Argentine President Cristina Fernandez de Kirchner expressed her sorrow for the loss of her husband, former President Nestor Kirchner, and gave thanks for the outpouring of support that followed.

Tearful at times, Fernandez said that each day she continues to govern, but that her life has been changed.

Nestor Kirchner, who was president from 2003 to 2007, died last week from an apparent heart attack.

"I've heard that this is the most difficult time. In reality, it's not," Fernandez said. "It's my most painful moment. And pain is something different than difficulties or adversity."

In her political and personal life she has faced adversity, but it doesn't compare with the pain she feels, she said.

"It's the biggest pain I have had in my life," Fernandez said.

She described Nestor Kirchner as her companion for 35 years in life as well as in the ideals they shared.

The president thanked the thousands of people who paid their respects by wanting to see him or praying for him, she said.

People gave rosary beads, flowers and soccer jerseys that she will keep, she added.

"I want to thank that immense and formidable display of affection and love, which he deserved," she said.

Among youths who sang and marched in memory of Nestor Kirchner, Fernandez said she saw the her husband's face reflected in theirs.

In addition to the great responsibility she feels for governing Argentina, Fernandez said that she now feels compelled "to honor his memory and honor his government, which transformed and changed this country."