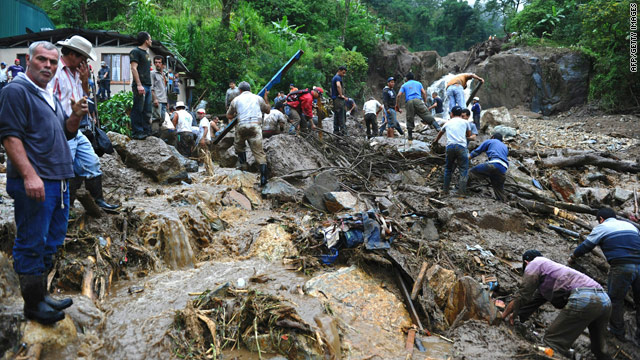 (CNN) -- At least 16 people died and more than 15 others were missing Thursday after heavy overnight rains caused severe mudslides in parts of Costa Rica, the nation's Red Cross said.

Another 600 people have sought refuge in 14 shelters, said the Costa Rica National Commission for Emergencies.

Images on Teletica showed rescue crews digging through demolished homes. In another scene, workers at a mud-covered overturned vehicle stretched out a white sheet over a victim's body.

Other images showed roads buckled by the ferocity of the rushing water. In another area, some residents strung up a rope between two banks so people could walk across a cascade.

Mudslides and flooding were reported in many places in the Central Valley area, which is surrounded by a handful of mountains and volcanoes. It is the most populous part of the nation.

Classes were indefinitely canceled at many of Costa Rica's public schools, the education minister said on Teletica.

About 800,000 people were left without safe water supplies, and residents were told to boil any water to be used for drinking or cooking.