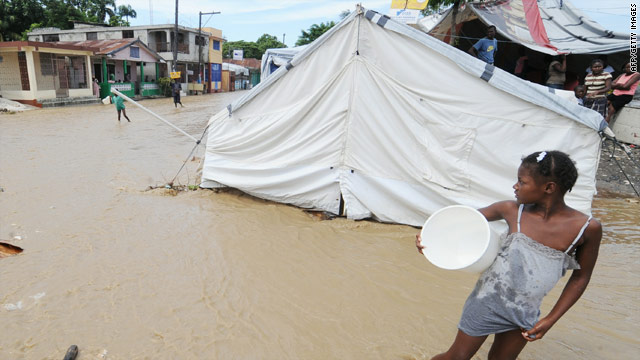 Port-Au-Prince, Haiti (CNN) -- Health and hospital officials in Haiti braced for the worse Monday, fearing the hurricane that battered the Caribbean nation over the weekend could worsen the cholera outbreak that has killed hundreds of people and hospitalized thousands since it began last month.

The official death toll attributed to the outbreak was 544, with more than 8,000 confirmed cases, Health Minister Alex Larsen told CNN.

On Monday, Dr. Toni Eyssallenne of Hospital Bernard Mevs confirmed the first case of cholera -- in a 3-year-old boy -- to originate and manifest entirely in Port-au-Prince.

Previous cases had been centered in Haiti's Artibonite and Central Plateau regions, including the city of St. Marc, north of the nation's capital. Until now, health officials said that those being treated for cholera in Port-au-Prince all contracted the disease elsewhere.

The young Port-au-Prince boy lived in a tent city across the street from a place that sells macaroni, and he had not traveled in over a year nor had he had contact with people from St. Marc or the Artibonite region, Dr. Eyssallenne said.

After suffering from nausea and diarrhea, the boy was treated and released from the hospital after his condition improved.

This was one of scores of tests being carried out on 91 residents of the capital -- all of whom live in or near the city's densely populated Cite Soleil slum, Larsen said. Except for one person who died over the weekend, all the others have recovered, he said.

Hurricane Tomas' trek past Haiti killed 20 people and injured another 36, a Communications Ministry official said Monday. Seven people were missing and 5,954 were homeless, the official said.

Health officials fear that the water dumped by the storm will worsen the outbreak. The concern is that overflow from latrines and septic tanks could contaminate the supply of fresh drinking water and contribute to the spread of the bacteria.

In the capital, the canals were not overflowing, said American Red Cross spokeswoman Andrea Koppel. But that was not the case in cities west of the capital, which bore the brunt of Hurricane Tomas, she said.

Still, even Port-au-Prince looks and smells like a dump -- a caldron of water, garbage and human waste. "We get used to it," said one resident.

Ten months after a magnitude-7 earthquake laid waste to much of the nation, people compete with animals scavenging through the ubiquitous dumps for scraps of food.

"The quick solution is management," said Environment Minister Jean Marie Claude Germain. "Management meaning that you have a structure in place, but the structure was not conceived with the slums in mind."

But most of the residents of Port-au-Prince live in slums.

"We're working on it," Germain said. "We will work with the private sector."