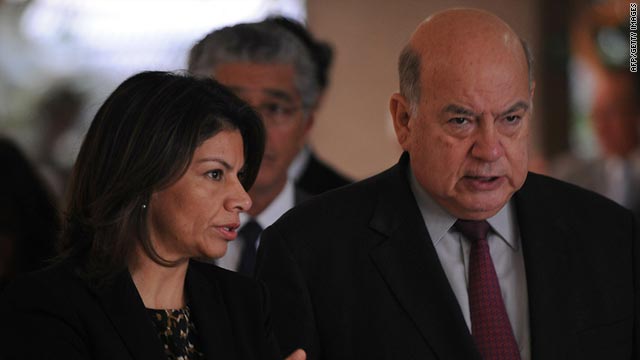 (CNN) -- Costa Rica will take its border dispute with Nicaragua to the United Nations and the International Court of Justice, if a resolution is not found, Costa Rican President Laura Chinchilla said.

Her comments Wednesday came a day after Costa Rica gave a 48-hour deadline to its neighbor to remove troops that it says are stationed on Costa Rican territory.

The dispute is over a parcel of land on the Atlantic coast, along the San Juan River, known as Calero Island. Nicaragua claims that the area belongs to it and denies that it is in Costa Rican territory. Costa Rica claims that it has been invaded.

The issue was first broached by the Organization of American States, which sent its secretary-general to meet with Chinchilla and Nicaraguan President Daniel Ortega.

In his report, Secretary-General Jose Miguel Insulza said both sides agreed to binational talks and not to escalate the military and police presence near the disputed area. However, both sides remain far from resolution.

Chinchilla said that her country accepted the recommendations made by Insulza, but said that before there are binational talks, the Nicaraguan troops must move back into undisputed Nicaraguan territory.

"It is not legitimate to go to a binational dialogue while our territory is under occupation by their military," she said.

If the Nicaraguan troops pull back, Chinchilla said she gives assurances that Costa Rican police will not enter the disputed area in its place.

In response, Nicaraguan Vice President Jaime Morales Carazo acknowledged that Costa Rica may have no standing army, but said that means little, given that members of the Costa Rican police are better armed than Nicaragua's soldiers.

In an interview with CNN en Español, he called on Costa Rica and Nicaragua "to resolve this as brothers" and "for a cease-fire in the verbal war," but added that Nicaragua is not the aggressor. "We cannot invade our own floor of our own house," he said. "Neither can we accept from anyone conditions or ultimatums."

President Daniel Ortega "is always disposed to dialogue," the vice president said, adding that Ortega and Chinchilla had enjoyed good "chemistry" in the past.

In addition to the Nicaraguan troops, Costa Rica claims that a dredging project in the river is dumping sediment on its side of the border, and that a Costa Rican flag in the area was taken down and a Nicaraguan flag hoisted.

Chinchilla also criticized logging that has taken place in the disputed zone, calling it "a flagrant invasion in a military sense, and to the environment."