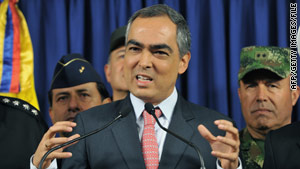 (CNN) -- The Colombian military on Monday killed at least 13 FARC guerrillas in an airstrike in southern Colombia, officials said.

The predawn operation was the result of police intelligence, the defense ministry said. It led to the bombing of a guerrilla camp in the municipality of Ipiales, near the border with Ecuador.

Among the FARC, or Revolutionary Armed Forces of Colombia, rebels who survived, was a minor from Ecuador, the defense ministry said. He and another survivor were treated and hospitalized.

The operation was "a very powerful blow to one of the most important structures of the FARC in the south of the country and wonderful news in the context of the first 100 days of the administration of President Juan Manuel Santos," Defense Minister Rodrigo Rivera said.

The bombing was against one of the most important units of the FARC, known as Front 48.

According to officials, about 35 rebels were at the camp. They are led by a guerrilla known as "Euclides," who is accused of shipping 25 metric tons of cocaine from Colombia to Central America and Europe.

"This is a decisive blow against Front 48, the structure that generates the most resources for the FARC by means of drug trafficking," Rivera said. "This is a new success of the joint and coordinated work by the military forces and the national police against terrorism."