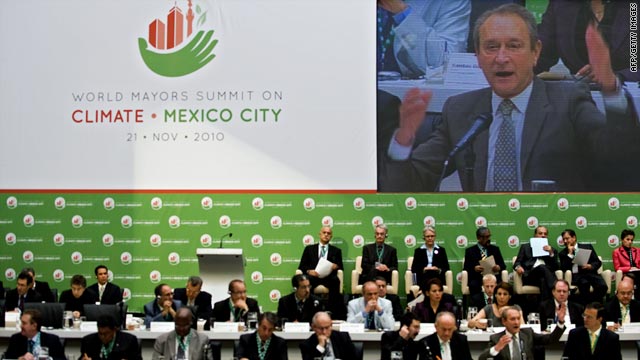 London, England (CNN) -- Mayors from around the world have signed a voluntary pact committing them to reduce urban greenhouse gas emissions at a climate summit in Mexico City.

The "Mexico City Pact," which was signed at the World Mayors Summit on Climate, has attracted the signatures of 138 mayors from some of the world's largest urban areas including Buenos Aires, Johannesburg, Los Angeles, Paris, Vancouver and Jakarta.

Marcelo Ebrard, Mayor of Mexico City and chair of the World Mayors Council on Climate Change said in a statement: "The world's cities must join together and put their data in the same pot."

With over half the world's population now living in cities, Ebrard says "mayors and urban leaders are on the frontline of the planet's fight against a changing climate."

A key component of the pact is the creation of a monitoring and verification mechanism called the "carbonn Cities Climate Registry" (cCCR) which will be operated by Germany's Bonn Center for Local Climate Action and Reporting.

The cCCR is designed to create uniformity in reporting of urban greenhouse gas emissions as well as keep track of local projects which combat climate change. City residents will be able to track how their city is performing and compare the results against other cities around the world.

Elizabeth Gateau, secretary general of United Cities and Local Governments (UCLG) said in a statement: "The cCCR is a platform wherein cities can work together. Cities are ahead of the game of nations and are leading the global process combating climate change. The cCCR will be the official reporting mechanism of this leadership."

She added that subjecting cities to open and independent reviews is a "critical step for monitoring and evaluating the implementation of emission reductions over long-term lines."

"Mayors and urban leaders are on the frontline of the planet's fight against a changing climate
--Marcelo Ebrard, Mexico City Mayor
RELATED TOPICS

"Last year in Copenhagen we realized that cities have a lot of opportunities and a lot of political will to fight against climate change. The Mayor of Mexico, as chairman of the World Mayors Council, asked his colleagues how to fight climate change and they decided to organize the World Mayor Climate Summit," Delgado told von Lipinski.

"Everyone is very excited to participate in this summit because they think that they are going to show national governments that it is possible to have commitments," Delgado said.

Cities have a great capacity to address climate change, despite the absence of a legally binding global treaty between nations, Delgado says. By convening the Mexico City summit mayors from all over the world are demonstrating leadership and their commitment to lowering emissions.