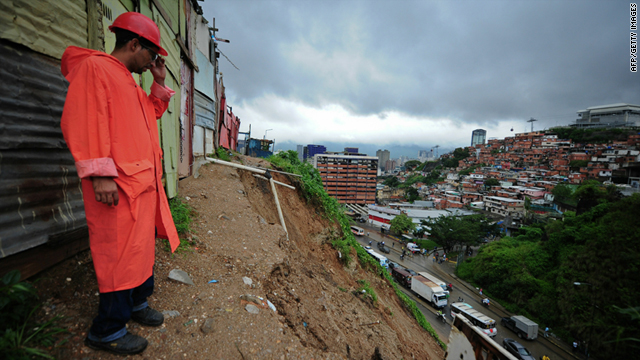 An employee of the municipality looks at the site of a landslide in Caracas, Venezuela's Roca Tarpeya neighborhood on Tuesday.
STORY HIGHLIGHTS
RELATED TOPICS

(CNN) -- Heavy flooding and mudslides have claimed at least 21 lives in Venezuela, where President Hugo Chavez declared a state of emergency in the state of Falcon, authorities said.

The victims were in the state of Miranda and the capital district, but problems were reported elsewhere, the state-run VTV network said Tuesday.

About 32,000 people in Falcon state are displaced, according to the AVN national news agency. Another 25,000 are affected elsewhere across the country, AVN said.

Government agencies are responding to the crisis, VTV reported.

Chavez told the network that heavy rains in recent days are worse than in similar conditions in 1999. More rainfall is expected over the next few days.

"I pray to God we do not have to declare a national disaster as occurred in Colombia," the president said.

Colombian President Juan Manuel Santos declared a state of calamity in 28 of the nation's 32 states in mid-November because of heavy rains and flooding that have affected 1.2 million people.

Chavez is allowing 20 displaced families to temporarily live in structures on the grounds of his Miraflores Palace, VTV said Monday.

CNN's Esprit Smith and Karen Smith contributed to this report.