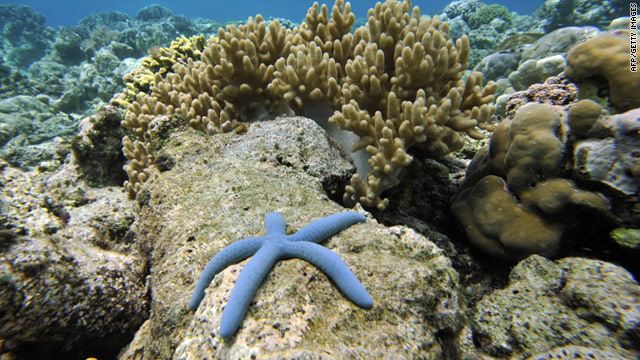 (CNN) -- The chemistry of the world's oceans is changing at a rate not seen for 65 million years, with far-reaching implications for marine biodiversity and food security, according to a new United Nations study released Thursday.

"Environmental Consequences of Ocean Acidification," published by the U.N. Environmental Program (UNEP)," warns that some sea organisms including coral and shellfish will find it increasingly difficult to survive, as acidification shrinks the minerals needed to form their skeletons.

Lead author of the report Carol Turley, from the UK's Plymouth Marine Laboratory said in a statement: "We are seeing an overall negative impact from ocean acidification directly on organisms and on some key ecosystems that help provide food for billions. We need to start thinking about the risk to food security."

Tropical reefs provide shelter and food for around a quarter of all known marine fish species, according to the U.N. report, while over one billion people rely on fish as a key source of protein.

Increasing acidification is likely to affect the growth and structural integrity of coral reef, the study says, and coupled with ocean warming could limit the habitats of crabs, mussels and other shellfish with knock-on effects up and down the food chain.

The report, unveiled during the latest round of U.N. climate talks in Cancun, Mexico, says that around a quarter of the world's CO2 emissions are currently being absorbed by the oceans, where they are turned into carbonic acid.

Overall, pH levels in seas and oceans worldwide have fallen by an average of 30 percent since the Industrial Revolution. The report predicts that by the end of this century ocean acidity will have increased 150 percent, if emissions continue to rise at the current rate.

But scientists say there may well be winners and losers as acidification doesn't affect all sea creatures in the same way.

Adult lobsters, for example, may increase their shell-building as pH levels fall, as might brittle stars -- a close relation of the starfish -- but at the cost of muscle formation.

"The ability, or inability, to build calcium-based skeletons may not be the only impact of acidification on the health and viability of an organism: brittle stars perhaps being a case in point," Turley said in a statement.

"It is clearly not enough to look at a species. Scientists will need to study all parts of the life-cycle to see whether certain forms are more or less vulnerable."

Scientists are more certain about the fate of photosynthetic organisms such as seagrasses, saying they are likely to benefit from rising acidification and that some creatures will simply adapt to the changing chemistry of the oceans.

The authors identify a range of measures which policymakers need to consider to stop pH levels falling further, including "rapid and substantial cuts" to CO2 emissions as well as assessing the vulnerability of communities which rely on marine resources.

"Ocean acidification is yet another red flag being raised, carrying planetary health warnings about the uncontrolled growth in greenhouse gas emissions. It is a new and emerging piece in the scientific jigsaw puzzle, but one that is triggering rising concern," Achim Steiner, UNEP executive director, said in a statement.