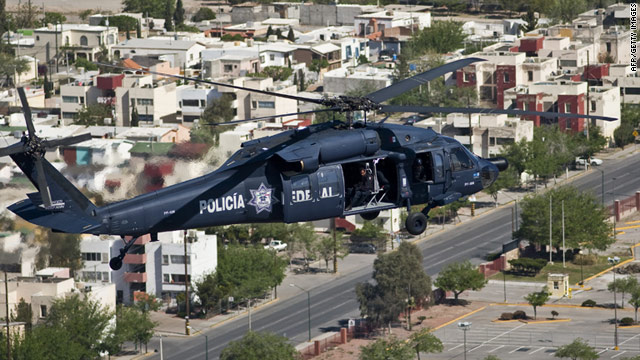 (CNN) -- Behind the headlines of the Mexican offensive against the drug cartels, there is a Mexico-U.S. relationship that is equal measures success and skepticism, leaked state department documents show.

The documents, made public through the WikiLeaks website, show that the United States has doubts about the way Mexican President Felipe Calderon's government is carrying out the fight against the drug gangs.

The United States provides intelligence and aid to the Mexican effort, but in the same breath lacks confidence in the way the Mexican army is operating, the documents show.

"Mexican security institutions are often locked in a zero-sum competition in which one agency's success is viewed as another's failure, information is closely guarded, and joint operations are all but unheard of," a January 2010 cable from the U.S. Embassy in Mexico states.

The U.S. assessment is that "official corruption is widespread," and it points out that only 2% of those detained are brought to trial. In Ciudad Juarez, a flash point in the war, only 2% of those arrested have been charged with a crime, it says.

Mexico's government did not respond to specific allegations, but sharply criticized the leaked documents in a statement released late Thursday, describing their disclosure as "illegal" and noting that they could pose a "serious challenge" to diplomatic relations.

Where is Julian Assange?
RELATED TOPICS

"The set of leaked documents and especially their contents are incomplete and inaccurate, reflecting a selection and a vision whose criteria are unknown," the statement from Mexico's foreign ministry said. "The leaked documents respond to specific events or times with no narrative context, which prevents proper evaluation and weighing of their relative importance."

Since taking office in 2006, Calderon has made the fight against the cartels the cornerstone of his administration, a decision that has come at a price. More than 28,000 people have been killed in drug-related violence since then, as rival cartels fight for lucrative smuggling routes, and as security forces and drug hit men clash.

The U.S., the consumer nation where the drugs are headed to, has pledged help to Mexico through agreements such as the Merida Initiative, which promises equipment, money and training.

As 2010 comes to a close, the violence and the drug traffic continue unabated.

Mexico's "inability to halt the escalating numbers of narco-related homicides in places like Ciudad Juarez and elsewhere...has become one of Calderon's principal political liabilities as the general public has grown more concerned about citizen security," the cable states.

The U.S. is particularly concerned with the effectiveness of the Mexican army, the leaked documents show.

For instance, the army was in charge of security in Juarez. After an initial success, the killings rose again, and the army handed its command over to the federal police earlier this year.

The U.S. state department viewed the Juarez experiment with the army in charge as a failure. The soldiers were not trained in law enforcement and cannot introduce evidence into the judicial system. As a result, the cable notes, there were more arrests, but no increase in prosecutions.

The United States was concerned that the criticism would make the army more risk-averse, and the embassy suggested to a U.S. delegation heading to Mexico that they should convince the army not to look back, the document shows.

"The challenge you face ... is to convince them that modernization and not withdrawal are the way forward, and that transparency and accountability are fundamental to modernization," the cable states.

The embassy also suggests that the United States can help Mexico with institutional improvements, "including greater attention to human rights and broader regional participation"

According to the cable, the U.S. was influential in the decision to pull the army back in Juarez.

A second cable, from December 2009, also shows an American hand in one of Mexico's biggest successes -- the killing of drug lord Arturo Beltran Leyva. The Mexican navy conducted the operation based on U.S. intelligence, the document says.

"The unit that conducted the operation had received extensive U.S. training," the cable states.

But the navy's success once again put the army in the U.S. crosshairs.

"(The navy's) success puts the Army in the difficult position of explaining why it has been reluctant to act on good intelligence and conduct operations against high-level targets," the document says.

At the same time, the January cable praised Mexican efforts.

There is "unprecedented commitment" from Mexico to focus not just on high-value targets, but on social and economic conditions that the cartels thrive in.

And Mexico, too, asks for help.

A third cable retells of a meeting between U.S. and Mexican officials where Mexico asked for greater intelligence sharing and more technology for intelligence gathering, as opposed to U.S. loaners.

In another communication with Washington, the U.S. Embassy was concerned about Mexican Defense Secretary Guillermo Galvan's idea to declare a state of exception in parts of the country in order to provide further legal justification for using the military in domestic anti-drug operations.

"Our analysis suggests that the legal benefits in invoking a state of exception are uncertain at best, and the political costs appear high," the cable states.

The document noted that the minister of the interior believed that a court decision already gave the military the justification it needed to operate. To date, the Calderon government has not resorted to using the state of exception.

In a cable back from Washington, the State Department asks for its embassy in Mexico to probe deeper into Calderon's personality and how he was handling the stress from the drug war, economic woes and midterm election losses.

While its statement did not respond to specific points raised in the cables, Mexico's foreign ministry appeared to go on the offensive Thursday night.

"Some of the reports that have been revealed include a subjective emphasis on the part of the person writing it which is considered in the interest of his superiors," the statement said, noting that the documents reflect "some deplorable practices with regards to the respect that should prevail between nations that collaborate toward common objectives."

The statement said Mexico's government strongly condemned the disclosure of the confidential documents.

"Mexico's government considers that for the majority of the world's countries, these leaks are a serious challenge to the constructive and harmonious conduct of diplomatic activities and of international relations as a whole," it said.

CNN's Krupskaia Alis in Mexico City contributed to this report.