More than 100 trapped after landslide buries homes in Colombia 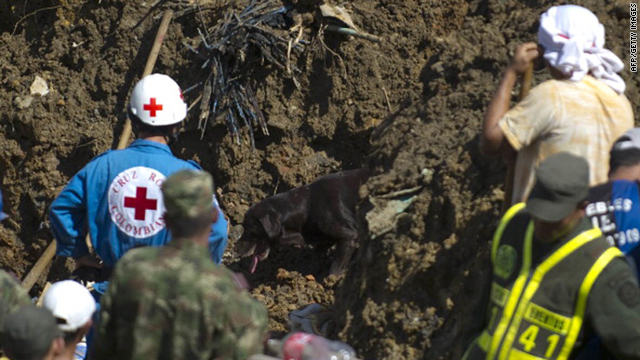 By Monday night, search crews had uncovered 23 dead bodies there, the Red Cross said, and more than 120 people could still be trapped underground.

But he said survival becomes less likely as time passes.

Rescuers had pulled at least seven injured people from the rubble after Sunday's landslide in Bello, Colombia, which buried between 30 and 50 homes, Nova said. Officials believe the neighborhood was particularly packed Sunday afternoon -- a time when families commonly get together for meals, he said.

"I hope they can be rescued. You could hear screams below the homes. I ask that they not stop the search. Thank God I could save my son and my husband also is alive. But I lost many loved ones," resident Maria Garcia told CNN affiliate Caracol TV.

More than 700 people were working in shifts on search teams at the site Monday, Caracol reported.

Amid the chaos of the rescue effort, a young boy tugged firefighter Carlos Garcia's belt.

"He asked me, 'firefighter, where are we going to sleep tonight?' And what most impacted me was seeing his little face. I also have a 6-year-old boy," Garcia told Caracol.

About 150 people from the neighborhood were in nearby shelters, Caracol reported, and government officials said they were evacuating other neighborhoods in the area.

At least 194 people have been killed and 248 injured after torrential rains throughout Colombia that have affected nearly 1.6 million people, according to the country's interior ministry. The downpours have caused landslides and overflowing rivers, destroying at least 2,040 houses and damaging nearly 270,000 more nationwide, the ministry said.

Colombia is considering declaring a state of emergency to devote more resources to response and rescue efforts, Colombian President Juan Manuel Santos said Sunday, describing the rains and flooding as "a tragedy that has no precedent in the history of our country."

The president said he plans to travel Tuesday to Bello -- a suburb of Medellin, Colombia.

"My heart is with the victims of this terrible tragedy... In a few hours we will go directly to Medellin to be with the victims' families and tell them, 'Whatever the government can do to mitigate this pain and suffering, we will be there,'" Santos said in a statement Monday.