Officials: French report about origin of cholera in Haiti inconclusive 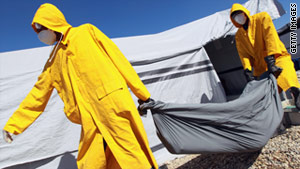 The death toll from cholera in Haiti has topped 2,000 people since the first case was reported in mid-October.
STORY HIGHLIGHTS

Port-Au-Prince, Haiti (CNN) -- A French doctor's report suggests that the strain of cholera ravaging Haiti may have originated with United Nations peacekeepers from Nepal, but U.N. officials and others cautioned that the report was inconclusive.

The report by French epidemiologist Dr. Renaud Piarroux rules out a number of potential causes and points to the Nepalese soldiers as the most probable, said Vincenzo Pugliese, spokesman for the U.N. mission in Haiti, but it fails to deliver definitive proof.

"We have not dismissed the report but we have not accepted it completely," he said. "We remain open to investigating this and we will get to the bottom of it."

The Centers for Disease Control and Prevention's Dr. Eric Mintz said research seeking the origin of the deadly outbreak -- the death toll has now topped 2,000 since the first case was reported in mid-October -- is being undertaken around the world.

"To date, I am aware of no evidence whatsoever that would suggest the strain in Haiti is unique to Nepal," Mintz said. "By the tests we have done here so far, this strain is indistinguishable from strains that have been seen in other countries in South Asia. Vibrio cholerae strains do not get their passports stamped when they cross an international border, and there are many strains in circulation around the globe at any given time."

More than 90,000 people have been sickened by the water-borne disease, according to Haiti's Ministry of Public Health. The first case was reported October 14 in the north of the country, near a camp of Nepalese peacekeepers, but Pugliese said he was unaware that Piarroux had ever visited the camp. Piarroux stated in his report that he and other health officials visited villagers living near the camp, and interviewed doctors who worked at the peacekeeper base. Piarroux -- who said his investigation lasted from November 7-27 -- said the first cases were seen in residents living near the Artibonite River, and he noted that many of the early victims were getting their water from that river or its tributaries, downstream from the U.N. peacekeeper camp.

At one village, Piarroux said, residents told his team they had seen pipes running from the camp to the river and that a nauseating substance flowed through the pipes. The residents said that military people removed the pipes, which they said came from a septic tank in the camp.

Doctors from the U.N. mission tested the latrines at the base on October 21, but the tests were negative for cholera, he said. The doctors told him the tests were conducted while the pipes were open.

"But it's impossible to know if the septic tank or the pipes had been disinfected before the samples were taken," Piarroux wrote.

Piarroux noted the first cases of cholera were reported just days after a new battalion of soldiers arrived from Kathmandu, Nepal, on October 8 and 12. Kathmandu was experiencing a cholera outbreak at the time, he said, but doctors said none of the soldiers came forward with symptoms and that none of the samples collected from the camp registered positive for cholera.

Piarroux, however, urged caution in accepting those reports, and suggested that officials could have taken measures to erase any trace of cholera.

While the epidemic began near the camp along the Artibonite tributary, Piarroux wrote, "massive contamination" of the river and its delta caused an explosion of the disease. Cases of the disease follow downriver in succession, he said, notably on October 19, when six communities 100 kilometers away from the initial outbreak -- all downriver -- experienced outbreaks.

"This massive and widespread contamination across the entire delta and region of the Artibonite could only have been started by dumping a phenomenal amount of fecal material from infected people all at once," he wrote.

And from those areas, he said, infected people carried the disease to other villages, where human-to-human transmission took place.

U.N. and Nepalese officials have repeatedly denied the charge that the cholera originated in the Asian nation.

Edmond Mulet, the head of the United Nations Stabilization Mission in Haiti, said all the tests conducted by the United Nations, Haiti's government, and independent groups at U.N. facilities and bases in Haiti have thus far been negative.

Mulet said it was possible that Nepalese soldiers had carried the bacteria to Haiti, but tests on human waste were negative and the soldiers have shown none of the symptoms of cholera, which include profuse vomiting and diarrhea.

"There is nothing conclusive," Mulet said.

According to the Centers for Disease Control and Prevention website, people can carry the cholera bacteria and experience no symptoms of the disease.

Haiti was already reeling from the devastating 7.0-magnitude earthquake that hit the island nation on January 12, killing more than 220,000 people, injuring more than 300,000 and leaving more than 1 million homeless. Last month, Hurricane Tomas brushed the island, dumping torrents of rain.

Several aid workers said they were concerned about the report's suggestions, given Haiti's currently volatile situation and stress that it is inconclusive. Pugliese said the publicity surrounding the report was "a point of concern" that more violence against the peacekeepers could erupt as Haiti was already tense pending the announcement of election results.

Stefano Zannini, head of the Haiti mission for Medecins Sans Frontiers (Doctors Without Borders), said the stir over the cholera outbreak's origins was not as important as the battle against the intestinal disease.

"One person is dying every 30 minutes in Haiti," Zannini said. "Knowing the origin of the epidemic has no impact on saving lives."