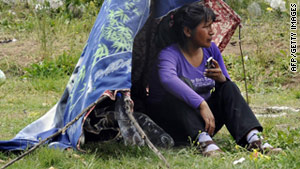 An estimated 1,600 families are camped in the park.
STORY HIGHLIGHTS
RELATED TOPICS

Four men were still in the hospital Monday -- one in serious condition -- after authorities cracked down on groups of homeless people who tried to illegally take park lands to start building houses, the state-run Telam news agency said.

The clashes grew so violent that Argentinian President Cristina Fernandez de Kirchner sent in National Guard troops to surround the park, where government estimates indicate more than 1,600 families are camped.

Authorities say many of the squatters are illegal immigrants, and the physical clashes have also become a tense political standoff between the federal government and city authorities in a nation that frequently attracts low-wage migrants from other South American countries.

Alejandro Salvatierra told reporters that many of the squatters were promised homes by the government 10 year ago, but are still searching for a solution that would give them a dignified place to live.

"This situation is a desperate one that made us take the decision we did," he said, adding that, "we will not leave the park until we have our housing."

"The national government would like to publicly condemn the criminal acts of political activists," said Julio Alak, Argentina's security and justice minister.

Federal officials have called Macri a "xenophobe" for saying the conflict was because of "uncontrolled immigration" of illegal immigrants from neighboring South American countries, including Bolivia and Paraguay, the agency said.

But they say it is Macri's responsibility to resolve the problem, since a government census revealed that a large majority of residents in the park come from the city.

"Now the government has to take responsibility of what happens in the park premises. In the meantime, the national government will take charge of keeping the peace in the area," said Alicia Kirchner, Argentina's minister of social development, according to Telam.