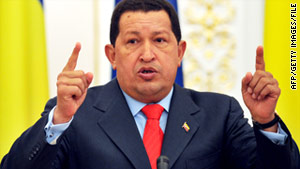 (CNN) -- Venezuela's lame-duck National Assembly has granted President Hugo Chavez the power to pass laws by decree for the next 18 months, the website of state-run Venezuelan Television reported Friday.

Critics say the 56-year-old president sought the power in order to push his agenda through the legislative body. Elections in September weakened the ruling party's hold on power. The new lawmakers are to be seated January 5.

"It's a coup d'etat," said Pastora Medina, a member of Congress from the Humanist Front Party who is opposed to Chavez. She called on Venezuelans "to show their rejection of the move by all means" possible.

"It's going to cause a lot of damage," she told Globovision, the nation's last television station critical of the ruling party about Friday's events.

But Chavez has said he was seeking the powers in order to be able to respond to recent flooding that has left thousands of people homeless.

He called his critics "pitiyanquis," a term of disparagement likening them to "defenders of the bourgeoisie, enemies of the people, defenders of imperialism." Speaking live on Venezuelan Television, he said he had become aware of plans to assassinate him and was "taking my own measures" to protect himself. But, he added, "I'm not going to hide in a cave."