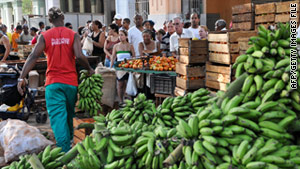 Cubans line up to buy farm food at a market in Havana May 2.
STORY HIGHLIGHTS
RELATED TOPICS

Castro has begun a radical shakeup of the Soviet-style economic model, previously announcing the elimination of one million state jobs and the expansion of private businesses. Cuba's National Assembly tapped him as the Caribbean nation's president in 2008, ending nearly five decades of rule by his older brother Fidel Castro.

As part of the plan, Cubans are being allowed and even encouraged to go into business for themselves, working as barbers, plumbers and even birthday clowns as the government tries to boost productivity.

"The measures we are applying, and all of the changes that are necessary for the modernization of the economic model, are aimed at preserving socialism, strengthening it and making it truly irreversible," said Castro, according to a copy of his speech published by the state-run website Cubadebate.

Castro has called for debates across the country before April, when the Communist Party holds its first congress in almost 14 years at which they could approve his plan.

In the speech, he insisted there should no longer be a stigma attached to working in the private sector.

"Many Cubans confuse socialism with handouts and subsidies, equality with egalitarianism," said the president, who spoke at the close of the country's National Assembly in Havana, according to Cubadebate.

The government expects the Cuban economy to grow 3.1 percent next year, up from a projected 2.1 percent growth in 2010.

"We can assure you that, this time, there will be no going back." said Castro.