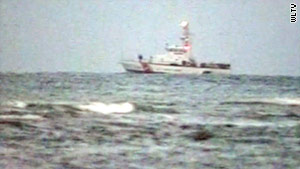 The U.S. Coast Guard is helping with search and rescue efforts off the Puerto Rican coast.
STORY HIGHLIGHTS
RELATED TOPICS

"The preliminary information we have ... is that the wreckage of (the) Army National Guard aircraft was found in the water near San Juan," spokeswoman Diane Spitaliere said in an e-mail.

The aircraft was destroyed, she said.

The crash occurred late Monday, according to Lt. Cmdr. Matthew Moorlag of the U.S. Coast Guard in Miami, Florida.

The Coast Guard received the call to help late Monday night with search and rescue efforts, said Ricardo Castrodad, spokesman for the Coast Guard in San Juan. He said three crew members and three passengers -- one guard and two civilians from Puerto Rico -- were on board.

The UH 72 Lakota helicopter departed Monday night from San Juan, he said. It was one nautical mile northeast from the Puerto Rican coast.

Castrodad did not provide information on casualties but said the search for survivors was ongoing.